In Margaret Dunlap’s “Observations of a Small Object in Decaying Orbit,” we follow the story of Sam, a young boy whose entire life is limited, restrained, and negatively impacted by the weight of events beyond his control and even his understanding. The unfairness of his situation and cruelty of his community is contrasted by the beauty of his mind and his yearning for connection with his parents. It’s a hard-hitting story with poignant visuals, and it will leave readers wanting to give Sam the biggest hug.

Margaret Dunlap is the author of more than a dozen published short stories and novelettes appearing in Uncanny, Shimmer, and The Sunday Morning Transport and as part of the Locus Award-nominated team behind Bookburners. She also writes for television where her credits include cult-favorite The Middleman, Blade Runner: Black Lotus, and the Emmy-winning Dark Crystal: Age of Resistance. She lives in Los Angeles, at www.margaretdunlap.com, and on Twitter as @spyscribe.

Marissa van Uden: Thank you so much for joining us to talk about this beautiful and heart-wrenching story, Margaret! In “Observations of a Small Object in Decaying Orbit,” the rules are different for Sam—any mistakes he makes are seen as a sign that he’s corrupted and rotten, and there is no “boys will be boys” for him. We see this frustrating unfairness and different sets of rules for different people in our own world too, as many marginalized people will no doubt relate to. Was this theme something you set out to explore when you created the character, or did it arise naturally during the writing? Is it something you think about a lot or see a lot in your own life?

Margaret Dunlap: There are stories where characters grow out of a world and stories where a world grows out of a character, and “Decaying Orbit” is one of the latter. I started with the idea of a kid on a huge spaceship playing catch with themselves. Well … why is he on his own like that? Answering that question led me to Sam: a boy living in a community that isn’t comfortable having him around but isn’t willing to get rid of him, because the group’s self-identity is that they don’t kill innocents. Once I knew that, the next step in the emotional logic was that authority figures would be looking for ways to catch Sam out, to prove that he wasn’t actually innocent. So, although that theme wasn’t something I set out to explore, it’s obviously something my brain was chewing over at some level or it wouldn’t have come out in the story.

MVU: The visual of the ball trapped in the orbit of the station’s core over the years, and the comfort it brings Sam through his struggles, is so poignant and heart-wrenching. Could you tell us a bit about the seed for this idea? And did you have to do much research to make the science part feel realistic?

MD: The first seed of this story was me wondering—as a thought experiment, more than anything else—if it would be possible for someone to play catch with themselves if they were on the inside of a rotating cylindrical spaceship or station. Would it be possible to throw a ball hard and far enough to make it across? Could you put a baseball into a stable orbit of the central axis, and if so, how long would it stay up there? But since I didn’t have the math or physics background to answer those questions definitively, it just become one of those ideas that floats around in my brain waiting for a place to land.

Then, in the summer of 2021, I was accepted to the Launch Pad Astronomy Workshop. On the day we were talking about space travel, one of the other participants brought up O’Neill Cylinders, and I was like, “Yes! Surely someone here has wondered about the possibilities this implies for solo games of catch and worked it all out!”

No one had, but workshop faculty Mike and Christian didn’t seem to think it was an absurd idea, and as I was describing my theoretical scenario, my friend Kim started giggling, then apologized. “I’m sorry. I’m just picturing some poor kid playing the loneliest game of catch ever.” Which had honestly never occurred to me. (Maybe because I’m an only child, solo games don’t immediately imply loneliness?) But as soon as she said that, I knew I had the key to turning my thought experiment into a story. Fortunately, Kim didn’t mind me taking her springboard and running with it.

I did some additional research, but my main concern was that the science had to feel plausible enough for us to believe that Sam could believe the ball was still up there. Beyond that, I didn’t want the calculus to distract from the emotional story.

MVU: I love that you never reveal to the reader exactly what Sam’s mother did, meaning that readers must adopt the same innocent perception of the wider politics and background events as the child stuck in this situation. We get only wisps and hints of understanding by reading between the lines, but mostly we just feel the ripples of the backstory affecting everything, just like Sam does. Did earlier drafts include more of his parents’ backstory and explanation of the station politics, or did you always intend to deliver the story in this oblique way. How did you decide what to include or not include?

MD: I have my ideas about what was going on aboard the ship when the Revolution happened, but I was never really tempted to put many details into the story itself. Mostly because, for Sam, it doesn’t matter if it was justified or not. Even if his mother was a monster, he’s still a kid trapped in a terrible situation who has to find a way to escape, if only in his own mind.

MVU: You also write for TV and new media. How do your experiences writing for film inform your short-story writing, and what are some of your favorite lessons from each that has translated well to the other?

MD: I think one of the primary things writing for television teaches is getting the most out of every moment. Every line of dialogue has to move the story forward, reveal the character of the person speaking, and entertain. That’s a helpful toolset to have for short fiction, where you want to hook a reader or editor’s attention quickly and tell a satisfying story with a limited wordcount.

When I’m writing short fiction, I love being able to play with language and imagery. As screenplays tend to be either sales documents (this is why you should make this!) or blueprints (this is how you make this!), there’s a limit to how poetic you can get, but I try to use my prose tools to make the read as visceral and evocative as I can.

MVU: I’m guessing that as a TV writer, outlining is a key part of your writer’s toolkit? Do you have a favorite tip you could share for new writers starting out and trying to learn the art of a good outline?

MD: Oh, so many thoughts on this! When I started out, I hated outlining. But a big part of the job of screenwriting is convincing other people that your story is worth telling, and the outline is an essential step in that process. Through practice I’ve gotten better at it, and over the years I’ve come to appreciate outlines as a useful tool. My big tip for new writers who struggle with outlining is to remember that outlining is just another step in the drafting process. I told someone the other day, “I think we’re all pansters at some level. The question is: are you pantsing your draft or are you pantsing your plan for your draft?” For me, outlines feel less intimidating when I think of them as a way to explore a story, rather than the step I have to get through before I get to the fun part.

MVU: You also teach classes for Cat Rambo’s “Rambo Academy.” Have there been any surprises or things you didn’t expect to learn or experience from teaching fiction?

MD: I always learn so much when I’m teaching, whether it’s fiction or screenwriting. That can come directly from my students and their experiences, or by virtue of the fact that explaining something to someone else means I have to really break it down and understand it myself first.

If I’m looking over material I’ve taught before and I’m not finding new aspects and angles that I haven’t seen before, I take it as a sign I need to dig deeper, or that it’s time to hang up the class for a while. Because if I’m not interested and engaged with the material, why should my students be?

MVU: Do you have any recent or forthcoming stories you’d like to share here for readers who want to check out more of your work? Any exciting new projects in the works?

MD: On the fiction side, my exciting news is that I have a piece, “Requiem for a Dollface,” that appeared earlier this year in Uncanny (issue 45) and another coming out in Fantasy & Science Fiction. TV has been keeping me very busy recently, but nothing I’m allowed to talk about yet! My nearly monthly newsletter (https://buttondown.email/spyscribe/) is the best place to keep up to date on my latest projects, plus, it has bonus content from my Twitter chronicles of the Duolingo dystopia.

MVU: Thanks so much for taking the time to share a bit more about this lovely story and writing in general!

MD: Thank you for your thoughtful questions! It was fun! 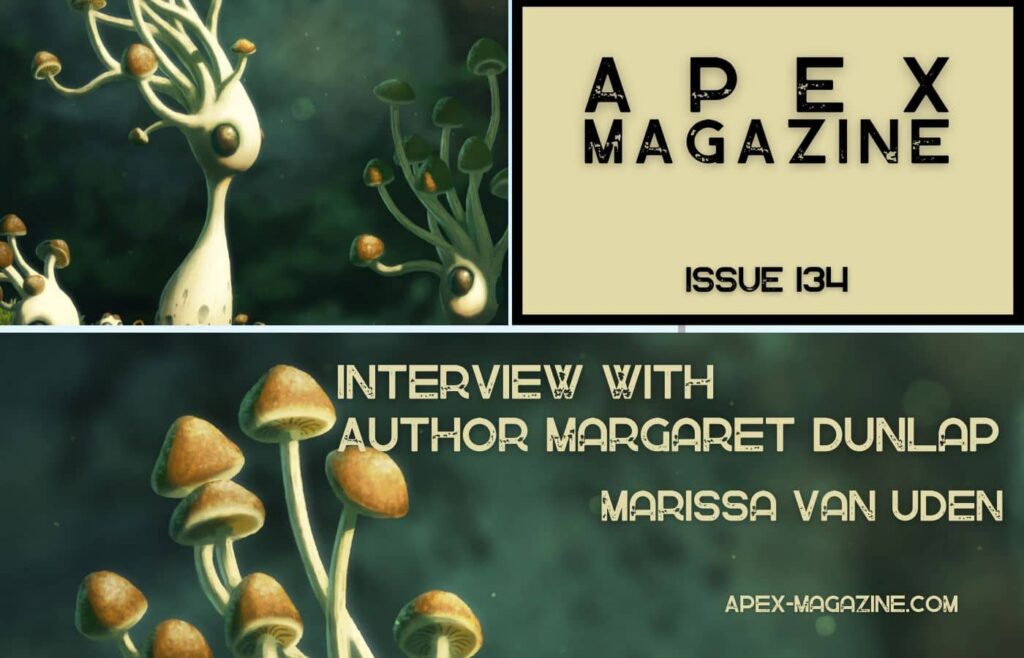