M. Shaw is a 2019 graduate of the Clarion Science Fiction & Fantasy Writers’ Workshop and a past organizer of the Denver Mercury Poetry Slam. Their absurdist body horror novella, One Hand to Hold, One Hand to Carve, is forthcoming from Tenebrous Press in 2022.

“The Cure for Loneliness” blends the surreal and the hilarious (plants drinking piña colada, anyone?) with the brutal reality of lonely city life during a pandemic. The protagonist is surrounded by a city of people, yet she has no one close by except a taxidermy cat and her plants, which become increasingly human. She deals with the endless pandemic isolation and weighty life challenges (such as the loss of relationships and a beloved pet) by maintaining a playfulness and sense of humor about everything, although, gradually, this happy shield starts to break down … along with her sense of time, reality, and more. Even Stuffed Henry, the taxidermy cat, may not be what he seems.

APEX MAGAZINE: This pandemic-era story truly captures the endless confinement, loneliness, and paranoia of this time—an uncomfortably relatable story for anyone who has felt that slippage of time and sanity during isolation and chatted to their plants (ahem). It’s also one of those rare gems that manages to keep a sense of fun even while diving into dark topics. The character uses humor and playfulness to cope with everything from her tragic losses to the unwinding of reality. Who or what inspired this choice in characterization and tone?

M. SHAW: With everything this character is going through, her choice of a person to reach out to is a coworker who knows her, like, kinda well. Not a best friend, not a family member, not a partner. There’s no one around her who’s actively invested in her well-being, so I think a big part of the playful tone is that she’s contending with this need to be palatable. Which, I think that’s fair. Nobody enjoys having a coworker unload on them out of nowhere, or out of some misguided perception of intimacy. But the alternative is letting all this heavy stuff fester, so she must find a way to get the story out without the “You” she’s addressing deciding that she’s too high maintenance or too much of a downer to keep listening to.

AM: I appreciated the subtle shifts in voice throughout this story, with the protagonist’s voice metamorphizing along with the plants and apartment. She starts out putting on a brave face, cheerfully maintaining her sense of humor through some seriously heavy life hits, including the loss of a long-time pet. But piece by piece, her voice betrays something else going on. At times, she seems almost giddily drunk, but later we see her having strange hallucination-like experiences and losing time and then making more ominous discoveries in the apartment. Was this metamorphosis of the voice something you had in mind from the very start, or something you threaded through during revisions?

M. SHAW: When I started writing this story, I was painting my house lilac purple with bright yellow trim. This was something I did in the aftermath of my very much non-amicable divorce, which had kicked off around the same time as the pandemic itself. Living alone is bad for my mental health, but there wasn’t any way to avoid it, so all I could do was try to try to have as much fun with it as possible (thus the purple walls). I got pretty good at the fun part, but I was still gradually losing my mind the whole time. Believe me when I say that shit got outlandish, and I’ll need a few drinks in me before I go into more detail than that about some of the other projects/mad science experiments I got up to. The mental metamorphosis in this story was really the centerpiece of what I was going for because I was trying to make sense of my circumstances. My writing style bends severely toward absurdism, so I guess sense may not be what I ended up making per se, but I certainly left feeling like I’d made something, and what more can you do in these troubled times?

AM: What were the challenges in writing this narrator who experiences so much internal change along with the setting?

M.SHAW: Definitely keeping things on track. This is a character who has a lot going on and the story takes the form of her explaining herself to a coworker. Plus, I tend to do a lot of character development in my outline notes that never make it into the story so there’s even more of her personal background floating around in the margins. My longhand rough draft had several sections that I had to cut off in the middle of some long anecdote about her job, or the ex’s behavior, or a conversation she had with Stuffed Henry. I’d just write “This isn’t going anywhere” and skip to the next section, figuring I’d tie it off better in the next draft. When I’m trying to excavate a coherent story from under a mental avalanche like the one she’s living through, the tangents do happen.

AM: The story is framed as a conversation with “you,” a coworker the narrator sees only on Zoom calls. I love how this pulls readers into the story, allowing us to be the nameless coworker on the other side of the screen. I also love how you end the story with an invitation to us to eat the apple and join the narrator in this new, photosynthetic way of being (in something better than loneliness, she claims). What inspired this choice of ending?

M. SHAW: Something I like about the current literary moment is that it feels like we’re rethinking so many of our basic assumptions about storytelling. One of those assumptions I think about a lot is what makes a story, or at least the ending, “happy.” Cooper Shrivastava, another writer from my Clarion cohort, once said something to the extent of “What is a happy ending, if not everyone getting what they want?” I feel like that really hit the nail on the head. Writing a happy ending feels much more complicated these days because people want all kinds of different things and they aren’t always things that are necessarily good for our health or well-being, and they’re often things that conflict with the wants of those around us. I like the idea of a story asking the reader to consider what they want, what it means for them to be happy. That’s a question that’s even more pressing in pandemic times, when so many of us are having to reevaluate the trajectory of our lives. I just felt like the best way to pose that question here was with the pseudo-epistolary format leading up to the invitation at the end.

AM: Okay, I must ask, if you found the paper bag on top of your mailbox what would you choose: Do you eat the apple?

AM: Do you have any other stories or fun projects currently in the works?

M. SHAW: My debut horror novella, One Hand to Hold, One Hand to Carve, will be out this April from Tenebrous Press. It’s about codependency and being sliced in half, with a heavy dose of getting lost inside one’s own mind. Also, it’s maybe a djinn or fairy story, depending on how you look at it. I’ve also been lucky enough to do some work on the forthcoming Los Suelos, California anthology, which is part of a really neat multimedia project from Surface Dweller Studios. Very much in the vein of Twin Peaks, Welcome to Night Vale, stuff like that. I’m hard at work on becoming an indie darling.

AM: Thanks so much for the delightful read! I’ll never look at my philodendrons in quite the same way.

M. SHAW: You’re very welcome! And I, for one, welcome our arboreal overlords. 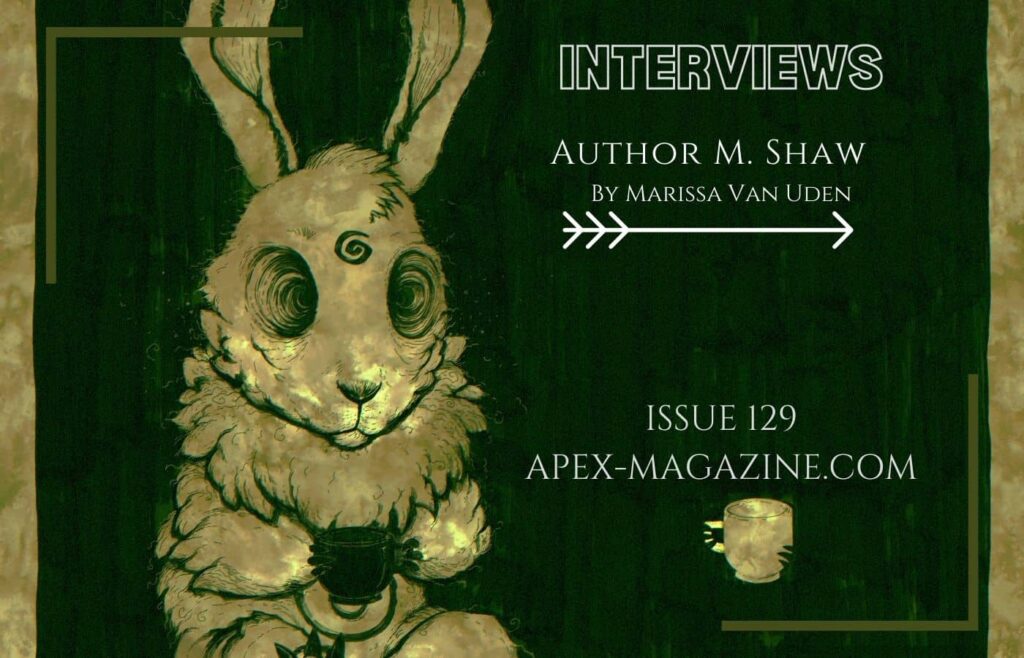