I may have to go back to blogging formal book reviews, just so I can write a 1,500-word think piece on “A Monster in the Shape of a Boy.” This story feels like an art museum. I walked into that museum, and two paintings changed my life.

Author Hannah Yang says this story is about (among other things) what children do to get their parents’ approval. Try to remember your youth, when you sought that balance between doing your own thing and having your parents’ approval. Who among us didn’t imagine a version of ourselves that our parents would fully approve of? We watched as our imagined self received the words we so wanted to hear. And it chafed because that person wasn’t us. It hurt because we knew we’d have to destroy ourselves to become that person. That’s painting number one.

Painting number two is ambiguity. You and your friends will read this story, and you’ll each come away with a different interpretation. What was the real reason they went after that woman? Was Peng always himself, or was he perhaps not himself for large chunks of the story? How much did Baba know, and how many times has Baba played out this scene with Peng? So many unanswered questions, so much ambiguity! Some readers prefer to have everything explained, and some readers love the negative space of ambiguity. I am firmly the second type of reader. In “A Monster in the Shape of a Boy,” Yang gave me a never-ending playground of negative space to play in, where I could blend my imagination with ambiguity. That’s the joy of reading stories like this: they are so much fun to talk about!

If you just want some enjoyable and satisfying surface reading, this story has you covered there too. Let’s go kill some monsters! Just don’t listen too closely to the voice that begs for its life. Whatever you do, don’t mistake that creature for a human, otherwise, you’ll hesitate when you go in for the kill. This museum is endless.

Author Hannah Yang lives in Colorado. She enjoys rock climbing, painting, and playing ukulele. Her fiction has appeared or is forthcoming in Daily Science Fiction, TulipTree Review, Nightmare Magazine, Analog, and elsewhere. She is currently working on a YA novel. You can learn more about her work at her website hannahyang.com or following her on Twitter at @hannahxyang.

APEX MAGAZINE: Thank you for writing this exciting story! What inspired you to write this story?

HANNAH YANG: Thank you so much!

This story was inspired by the ways kids try to change themselves to earn their parents’ approval. I started with this vivid mental image of a young boy killing off a weaker version of himself to try to make his father proud.

AM: If given the choice, would Peng follow in his father’s footsteps and become a monster slayer for hire?

HY: Hmm. I suppose it depends on what you mean by “choice.” I think Peng wants his father’s approval more than anything else. If given the choice, he’d probably do anything that he thinks Baba would have wanted, which includes becoming a monster slayer. I don’t know if that counts as a real choice, but it’s hard to disentangle that element from the rest of Peng’s character.

AM: I love stories that end with a surprise, and I loved the twist at the end of this story! Did Baba follow Peng home? A spoilery question, I know, but when did Baba realize the truth about Peng?

HY: I think the most interesting scene to write was the first one when Peng comes face-to-face with a boy who looks exactly like himself. It was the mental image that inspired the rest of the story, and so it was a lot of fun just capturing that on the page.

The most challenging was the last one when Peng and the other boy come face-to-face again. The hard part about constructing a circular story is that you have to make sure everything matches up plausibly, without sewing it up too neatly.

AM: Are you a plotter or a pantser? What’s your system for working ideas through your mind and turning them into a story?

HY: I’d say I’m more of a plotter when it comes to novels—I make outlines and book maps and Excel spreadsheets galore—but my short fiction tends to grow a lot more organically.

When I write a short story, I usually start with a mental image that makes me feel a strong sense of curiosity. In this case, it was the image of a young boy killing a weaker version of himself. My immediate questions were: Why is he doing that? How does this other version of himself exist? What’s going to happen to each of them? From there, I just follow my curiosity until I’ve written a first draft.

AM: You have some beautiful watercolor paintings on your website. Does your artwork inform the fiction you write or sometimes the other way around? Do you ever use writing to figure out painting ideas or use artwork to figure out writing ideas?

HY: That’s very kind! I’ve never consciously used writing for painting ideas or artwork for writing ideas. I think there’s some overlap, though, in the sense that a lot of my creative process centers around following my curiosity. Because of that process, I do end up painting and writing about a lot of the same themes.

AM: Who are some of your favorite writers and artists? Why is their work important to you?

HY: My favorite writers are Carmen Maria Machado, N.K. Jemisin, and V.E. Schwab. I think what I love about their work is that they all write about real-world truths through magical stories.

AM: I saw something on Twitter about a novel you’ve finished … something about a girl who wants to be a magician? I am all ears for any details you can share! Would love to know anything you can tell us about the novel, and what your experience was like writing it.

HY: Of course! I’m working on a YA fantasy novel about a watercolor painter who auditions to join the magical world, using her paintings as spells. I just finished the second draft and I’m about to dive back into another round of revisions.

This one was a lot of fun to write—I have an amazing critique group that’s been on this journey every step of the way, so it was a lot more collaborative and exciting than my usual writing process.

AM: Painting as spells? I’m sold! Thank you for chatting with me. 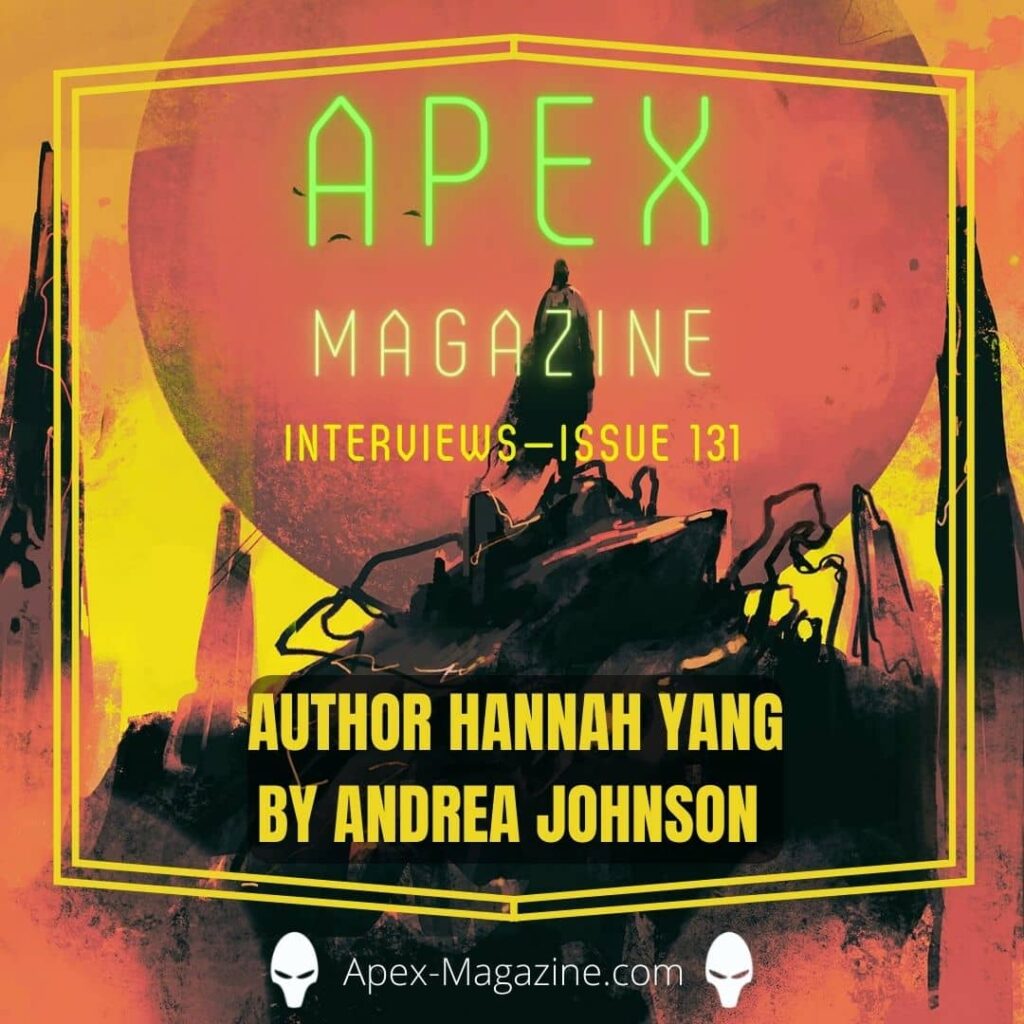