If we program AI robots to be curious about their creators, they’ll be curious. If we program them to want to create more of themselves, that is what they’ll want. The AI androids in Erin K. Wagner’s short story “Whose Mortal Taste” have met so few humans that they aren’t sure if their curiosities, yearnings, and philosophical conversations are something they were programmed to do or something they evolved to think about. What they don’t discuss is how human their social groups and verbal mannerisms are.

But there is something the androids yearn to know. They need to know if they are alive. The debate then becomes, what will they do with this knowledge, and how will the knowledge change their society? If the humans all suddenly wake up and say “Of course, you’re alive!” then what? And what if the humans suddenly wake up and say “Are you crazy? Of course, you’re not alive. You are a machine that I created”? The androids are stuck in that moment: they know what the question is, but they don’t know if they want their question answered. As soon as the question is answered, their conversations will be over.  And their conversations and board games are so lovely, not something to so easily say goodbye to. Once you have knowledge of what you are, you can’t un-know it, and you forever become what you’ve been defined to be.

If the androids in “Whose Mortal Taste” are looking for another “joke” to tell the human they defrosted, they’re welcome to use this one: What’s the difference between “programmed to want something” and “socialized to want something”? I wonder how many days it’ll be until they realize there is no punchline.

Erin K. Wagner is fascinated with how the human responds to the nonhuman, with “nonhuman” not being limited to androids. Fascinating to me as well, is how humans interact with and respond to entities that we’ve convinced ourselves we understand—androids, aliens, octopuses, even God, and how might those entities interact with us? After all, we’re strangers and weirdos to them too.

A medievalist by discipline, Wagner is a woman who uses her knowledge of the past to see into possible futures. Her fiction, poetry, and nonfiction have appeared or are forthcoming in Clarkesworld, Apex Magazine, Bourbon Penn, PULP Literature, Luna Station Quarterly, Nightmare Magazine, and elsewhere.  She is also the author of two novellas, The Green and Growing from Aqueduct Press and An Unnatural Life from Tor.com, and ran the “A Woman Was Here” column at Luna Station Quarterly. To explore more of Wagner’s work, I recommend starting with her list of works, erinkwagner.com/short-stories.

Apex Magazine: The title of this story references Milton’s Paradise Lost when the forbidden fruit was eaten. What were you thinking about when you wrote this story?

Erin K. Wagner: I’m a medievalist, so I guess—like any proper medieval writer—I’m always thinking about classical or religious allusions as I write. I referenced Paradise Lost in this story because I imagined the androids re-enacting the fall essentially. They are eager for a knowledge that may destroy them, eager for the knowledge of their creators.

AM: By the time the readers meet the androids of this story, humanity has gone extinct, with a few of us frozen away in stasis. With humanity effectively dead and gone, why should androids care if a bunch of dead people think that androids are alive? Why care about the opinions of dead people?

EKW: Probably because I’m a human and selfishly absorbed with examining my own condition (as is all of science fiction—with humanity, that is, not with me alone). But also, because if humans created these androids, I imagined some curiosity on the part of the androids about who they were built to imitate. And the humans had designed these androids specifically with the goal of creating procreating robots. So, the androids are perhaps built to be interested in their own genealogies.

EKW: That is an excellent question, and one I imagine these androids are grappling with on some level themselves. Maybe that’s even what drives them on their quest in the first place. Because they have a very set schedule we see—filled with something approximating social visits, chores, thoughts about offspring—but nonetheless, it rings a bit hollow. Or perhaps we see in this story the first inkling of that question of purpose. And perhaps that question is the forbidden fruit.

AM: The human who is revived is just as shocked as the androids. This man was put into stasis in hopes of awakening in a better world. What do you think he was expecting when he woke up?

EKW: I imagined this man to represent the sort of human-centered approach to the world that writers of robot fiction continually run up against. Which is hard to sidestep. He expected to wake up in a world where his needs would be foremost but instead finds himself at the mercy of former servants, androids that are now establishing their own identities and purposes.

AM: Academically and creatively, you are interested in how the human responds to the nonhuman, and “Whose Mortal Taste” examines how the nonhuman might respond to a real live human. What makes how we respond to AI’s (and vice versa) so fascinating?

EKW: I think of Janelle Monae’s fascination with the android here, her use of the android figure as metaphor. And by no means do I attempt to match up to her artistry here. But I think there’s something very basic at the core of science fiction that uses AI as a mirror for our human selves. I know some writers and critics are tired of this use of AI, but I’m not sure it’s something you can ever truly escape no matter how hard you try as long as you identify in any way as human yourself. We create AI, real and fictional, and they absorb our shapes and values. What do we see in that mirror? Because of this, I’m always trying to think of the best way to represent my own interest: the human meeting the …?

AM: You wrote the “A Woman was Here” column at Luna Station Quarterly. How did the idea for this column come about? What are your top three recommended articles from that column?

EKW: Yes, I wrote the “A Woman was Here” column at LSQ (can’t recommend this publication highly enough!) regularly for a couple of years, and then had to take a step back when other obligations piled up. Maybe one day I can start it up again. But the column is still available to read and is ultimately meant to highlight women writers and creators in the field of speculative fiction. I feel self-conscious recommending my own work, but I will say that I had a lot of fun writing the re-read of Jonathan Strange and Mr. Norrell that closed the column. If we’re talking about the act of writing, you might check out my piece on Ursula K. Le Guin’s carrier bag theory of fiction in “Carrying Us Forward”. And then, to keep it thematic, you can look at my review of some of Monae’s work in “Electric Ladies.”

AM: Do you have any current or new and exciting projects you are working on that you can tell us about?

EKW: I don’t know of any writer who doesn’t have at least one project in the works, even if it’s just simmering on the back burner of their imagination. Right now, I’m querying a novel (yep, about AI) and starting to outline a weird new one that tries to combine regency fantasy with space opera with a critical look at American colonialist narrative. But since I’m finishing up an academic monograph on the language of medieval heresy, I will probably only start that novel in earnest next year.

AM: Who are some of your favorite writers, poets, and artists? In what ways have their work inspired you?

EKW: What a great question. And such a hard one for a person whose job is books. I would say that I was initially drawn into the world of speculative fiction by J.R.R. Tolkien and C.S. Lewis. I still read and re-read them now, while also acknowledging the problems they introduce or don’t address. Authors I came to as an adult and love are Susanna Clarke and Ursula K. Le Guin. Both of them have such a deft handling of language and can make the quiet moments as potent as the loud ones. Right now, I’m finishing up a re-read of The Left Hand of Darkness and looking forward to starting Black Sun by Rebecca Roanhorse.

AM: Oh, you are going to love Black Sun by Rebecca Roanhorse! 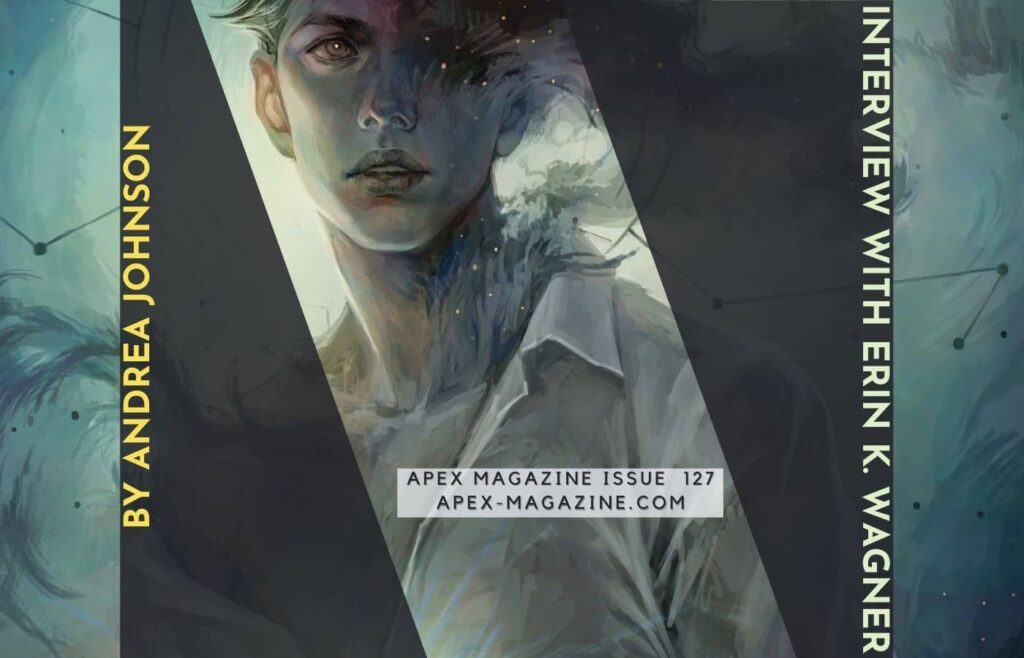