“Ten Steps for Effective Mold Removal” by Derrick Boden is a story about Hitomi A, whose life is slowly unraveling as a strange mold infects the world. It’s told through a series of charmingly funny product reviews. What I loved about this story is how so much of it is revealed through subtext (it really rewards a second read) and also how it takes the reader on such an emotional journey. We start out with Hitomi’s hilarious light-hearted reviews as she deals with “the mold situation,” as the media calls it, but review by review, I felt myself shifting from amusement to creeped-out curiosity, growing dread, and finally to sadness. The last lines of this piece are so haunting. Below, I dig into this story with the author, Derrick Boden.

Derrick Boden’s fiction has appeared and is forthcoming in Lightspeed, Clarkesworld, Analog, and elsewhere. He is a writer, a software developer, an adventurer, and a graduate of the Clarion West class of 2019. He currently calls Boston his home, although he’s lived in fourteen cities spanning four continents. He is owned by two cats and one iron-willed daughter. Find him at derrickboden.com and on Twitter as @derrickboden.

MARISSA VAN UDEN: Thank you for chatting with us, Derrick! I loved how you structured this piece. Could you share a little about your process for crafting this story, in particular the choice to tell it through product reviews. What inspired it, and is the final version close to what you set out to write or did it change a lot during the process?

DERRICK BODEN: Thanks for having me! I’ve read a lot of product reviews over the years, for whatever reason, and I’m always captivated by how much they reveal about a person. I love unconventional narrative structures in stories, and one day I dreamed up this idea to write a story using only product reviews, mostly to see if I could do it. The only problem: I had no clue what the story would be about.

I brainstormed some logical connections, none of which thrilled me, so I took the opposite approach and dug around my idea bag for a “least likely to succeed” option. Sometimes the friction between disconnected ideas—in this case, online product reviews and an uncanny, psychotropic mold epidemic—can create some really interesting stuff. I gave it a shot, and by the end of the first scene I felt like I had something. So I researched a bunch of interesting products (my targeted ads will never be the same), threw together a loose outline (my lifeline, like Arthur Dent’s towel), and got to writing. A lot of the details evolved as I wrote, but the core structure and main plot points stayed pretty much on track with what I’d set out to write.

MVU: The voice of this piece is just perfect to me. Hitomi is disarmingly funny and charming, and yet she also strikes me as such a lonely person, an outsider who doesn’t feel accepted by her peers even before the mold changed the world. I thought her chatty, over-familiar product reviews revealed a character just dying to connect with others in one way or another, even if they’re strangers she can’t perceive. This made it feel all the more tragic when the one person she is intimate with becomes imperceptible to her as well. How did you develop her voice and character, and is she someone you had in mind from the start or did she emerge during the writing?

DB: Great question. I’ve heard a lot of people say that in writing you have to surprise yourself, and although I can’t say whether that’s wholly true, it was definitely the case with Hitomi. I went into this ordeal with only a vague sense of who she was, and by the end of the first scene I felt like I’d discovered a new friend. I think you really nailed your summary of her—she’s the type of person who would giddily spill her most embarrassing secrets in a product review, and that was the seed from which all of her other traits and quirks grew. Once I understood who she was at her core, I knew (unfortunately) what had to happen to her. Getting there was, for me, equal parts harrowing and rewarding. Probably the best advice I’ve ever gotten about writing voice came from Scott Andrews at Beneath Ceaseless Skies, who said (so very succinctly): you have to go for it. You can always scale back during revision, but the first draft—for me, at least—is the time to step into this other person’s skin, feel what she’s feeling, and say whatever comes to mind.

MVU: The way you control the mood throughout is beautifully done. What questions did you ask yourself during the writing and editing process (if any) to get this tone and mood right throughout?

DB: I’m so glad to hear that, because this story was thoroughly unsettling to write. At one point while I was hunched over my laptop writing, in the middle of the day, my wife opened the fridge behind me and it startled me so much I slammed my knees into the bottom of my desk. As I turned around, there was a moment where I was convinced she wouldn’t be there (thankfully, she was). So, although I did take stock of where I wanted the reader’s mood and expectations to be periodically, for this story it was more about riding this unsettling wave of my own mood as I wrote.

That said, I still spent plenty of revision iterations on fine-tuning the information delivery, trying to find that balance between revealing too little and too much, all of which plays into the story’s mood. For this, the questions I asked all centered around Hitomi—what her expectations were at each moment, how to subvert them, and how to amplify her own mood to better serve the mood of the story as a whole.

MVU: Many writers are struggling to maintain their focus with all that’s been going on in the 2020s. Have you found any rituals or habits that work well for you? What does your daily writing practice and schedule look like, if you have one?

DB: Wow, yeah. First of all, I should preface this by saying that any struggles I’ve had pale in comparison to so many people—the school teachers, the doctors, the close families of victims. Thankfully, I’ve been relatively lucky.

That said, writing has certainly been a challenge at times. I have a young daughter, and during the various periods of school closure, with my daughter at home and both me and my wife working full time, finding a minute to write has not always been easy. For me, to your point, ritual is the key. The one thing I’ve tried to maintain throughout the pandemic is writing early in the morning, every day—even if it’s only for a half hour. There’s something powerful about digging into a creative project before my brain is muddied with news and work and all that other stuff. If I can do that one thing, the piece I’m working on almost always sticks with me throughout the day, somewhere in the back of my mind—and I’m that much more likely to come back to it at the end of the day, no matter how exhausted I might be. Lately things have been a bit easier in terms of school closures, but I doubt I’ll give up the early morning writing anytime soon.

MVU: What are your favorite themes to write about at the moment, and is there anything you’re excited to explore in the near future?

DB: I love to question preconceived notions. For me, that’s probably my favorite approach to theme in writing—take a concept (genetic engineering, capitalism, love—even fundamental stuff like the physical world around us, such as in “Mold Removal”) and question the hell out of it. The more uncomfortable the questions make me feel, the more engaged I am with the story. Lately I’ve been interested in memory, cognition, and all the truly badass ways our brains adapt under extreme circumstances. Some of the more recent studies on the human brain are terrifyingly cool, and oftentimes completely counterintuitive to our notions of space, time, and thought. Right up my alley.

MVU: Where do you draw a lot of your writing inspiration from? Any other artists, works, places, or projects that really set your imagination on fire?

DB: One piece of advice I hear a lot is to read broadly. I try to stretch that a little further, to experience broadly. Reading can offer great inspiration, and it’s probably very hard to get good at writing without doing it, but reading alone (for me at least) leads to derivative writing. Doing stuff, on the other hand, gives me a whole different perspective. So I travel as much as I can, try out new hobbies, explore new parts of town. Get into trouble. I also move a lot, which helps keep the creativity flowing—new places bring new people, which brings new perspectives and ideas.

I love physical art, too. Probably ten percent of my stories have started with a visual image—a piece of art I stumble across in a café or sprayed across the brick wall of a condemned building. Others come from song lyrics—even a comedically misheard verse can be full of ideas. All of which is to say, I like to imagine the world around us as a sort of Matrix for story ideas—once you start seeing things in a certain way, the ideas are literally everywhere.

MVU: Thank you so much for sharing these insights with us! Any new projects or upcoming publications where we can find more of your work?

DB: Thanks so much for your questions! I have a few things in the pipeline at the moment. I have a story appearing in Lightspeed soon and another coming soon at Analog. My agent, the incomparable Hannah Bowman, is helping me find a good home for my first novel (a near-future cyberpunk thriller), and I’m working through a draft of my second novel as well. 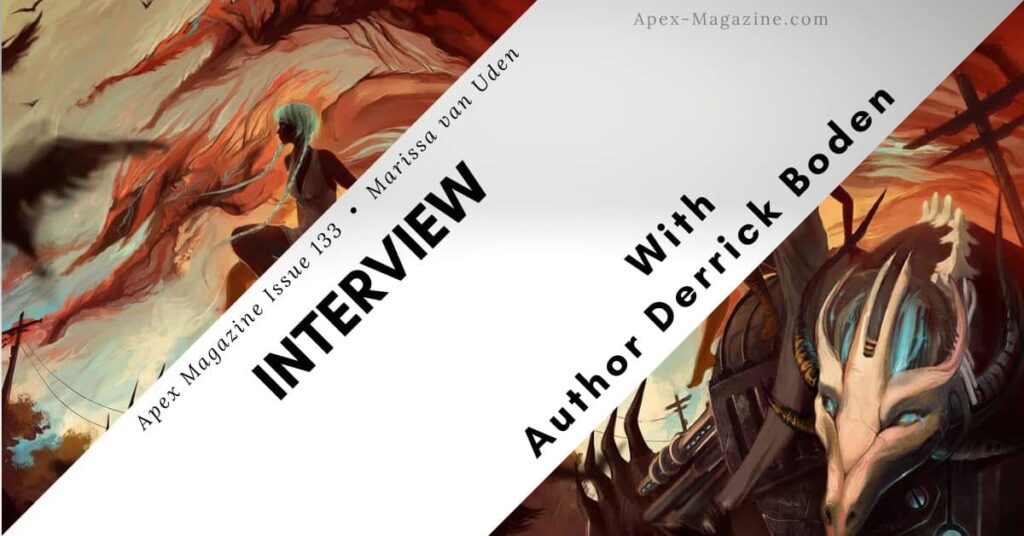