Who are the monsters? The scary creatures in childhood bedtime stories or our neighbors? Or both?

Was the monster just a regular animal until people came along and said it was a monster?

In Bonnie Jo Stufflebeam’s story “Creatures of the Dark Oasis,” I related to Kirsten’s teenage ennui. I remember desperately wanting to be in relationships and throwing myself into them, then going through the motions and being frustrated that my emotions lagged. Why couldn’t I figure out how to “be in a relationship?” Everyone else seemed to be doing just fine, what was broken in me that I couldn’t get this right? It looked so easy.

Fans of Stufflebeam’s works will recognize the finwomen who live on the edges in the margins of Kirsten’s small town. Kirsten sees women who don’t fit in, the same as her. Things don’t work out as she planned.

Stufflebeam’s works have appeared in over 90 publications including Uncanny, Lightspeed, Beneath Ceaseless Skies, LeVar Burton Reads!, Interzone, and Daily Science Fiction, among others. She resides in Texas where she lives with her partner, an unspecified number of cats, and an incredible rubber ducky collection. Her short story collection, Where You Linger and Other Stories, will be available in July 2022 from Vernacular Books, and her novella, Strange Fiends, will be available in September 2022 from Underland Press. You can learn more about her work at her website BonnieJoStufflebeam.com and follow her on Twitter at @BonnieJoStuffle.

Her work isn’t limited to the written word!  She has written word and jazz music experimental compilations, and now you can say you know someone who writes for Chapters games! If you’ve never played a Chapter’s game, they are dialog-heavy absolutely lovely brain candy visual novels.

There’s a numbness at the end of “Creatures of the Dark Oasis.” Kirsten accepts that in one breathe someone can be kind, and in the next breathe they can do something monstrous without thinking twice.

That numbness? With all that’s been going on in the world? I get it.

APEX MAGAZINE: What inspired this story? What were you thinking about while you were writing it?

BONNIE JO STUFFLEBEAM: I wanted a queer Creature of the Black Lagoon story, so I decided to write my own! Gay girls should have their own scary fish people to obsess over. Then, I wanted to tell a story about a small lake town, so that piece went into it as well, particularly exploring monstrous people in a small town versus actual monsters.

AM: Parents tell their children scary stories about finwomen so their children will behave and also fear the finwomen. But Kirsten isn’t afraid. “People hid their darkness, while the finwomen embraced it.” Is Kirsten looking to embrace her darkness? Is she disgusted by the masks we hide our darkness behind? Why is she so interested in finwomen?

BJS: As a kid, I was fascinated by the scary stories my parents told me, particularly when they involved inhuman creatures. Kirsten feels like an outcast, and at first, she thinks the finwomen are merely misunderstood like she is. When she finally meets one, she realizes that they are monstrous, but so are the people around her. More than disgusted, she’s fascinated by darkness, but as she grows older, she’s numbed to how prevalent it is in her world.

AM: And now I am interested in finwomen too! Where do they live? What do they eat? What do they think of humans? What would need to happen for the townspeople and the finwomen to live in peace?

BJS: I’ve written about finmen and finwomen in a few stories, so I’ve built up a whole mythology for them. They live in the places we try to forget: dirty islands, polluted lakes. They’re both frightened of and aggressive toward humans. I’m not sure about living in peace, but some people are trying to reach that point.

AM: When we first meet Kirsten she’s a teen, doing all the normal stuff like going camping with her girlfriend, drinking cheap beer, and going “hunting” out on the lake. It’s a while, a long while until we learn her girlfriend’s name.  Talk to me about the intentionality of waiting until the two women are adults before we learn the first name of Kirsten’s first girlfriend.

BJS: Kirsten has a hard time loving; she’s scared of it, being from a town with no other queer women. Not revealing her girlfriend’s name was a way to show that Kirsten feels unattached even to the girl she’s supposed to care for.

AM: What are some of your favorite themes to write about? Why do you think you keep returning to those themes?

BJS: I return to themes that touch on my own trauma and fear, but also to themes that I have fun with. Family is a big one. Queerness, as someone who grew up gay in a small town. Monsters, because I love writing creatures that are different than us.

BJS: The collection is compiled of interconnected stories, so it was fairly simple to figure out what to include! I started with stories I consider set in the past of a small town called Riddle, Texas, and moved through time until I arrived at the future of the city. Within the collection, you’ll get to know several characters and how they relate to other returning characters.

BJS: At the time, I was married to a jazz musician, and we wanted to do something fun that paired music with words. We decided to hire actors to read some of my short stories, then set them to music. My favorite story is “The Stink of Horses,” which is about a ballet dancer and used some original Tchaikovsky themes.

AM: I’ve played some Chapters games, they are tons of fun! What can you tell us about being a Narrative Designer? How is writing for games different than writing short fiction? What surprised you most about writing for Chapters games?

BJS: I love working for Chapters! It’s so much fun to adapt romance novels into visual novel games. One thing that’s different is that subtlety is harder to get across when you’re mostly writing in dialogue, and most games are dialogue-focused. 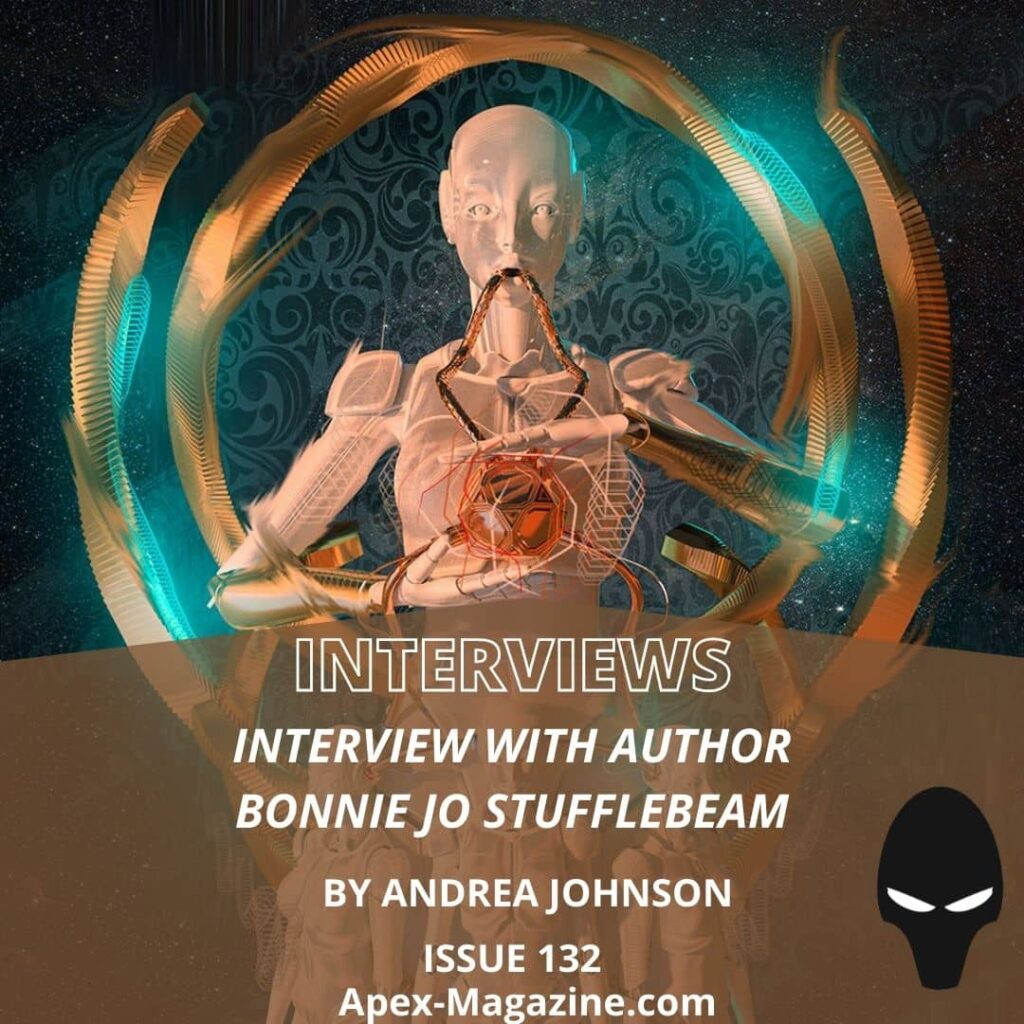