This month’s cover art features the work of freelance Croatian fantasy illustrator Luka Brico. With his recent work on the collectible card game, A Glimpse of Luna, Brico is expanding into book covers and metal band album covers, exhibiting a style perfect for Apex Magazine.

APEX MAGAZINE: “Alone With Your Fears,” this month’s cover piece, is a seemingly simple vision that betrays the complexity of the message within. As you explain on your site, “it’s a vital part of one’s personal growth to sit down with all those inner demons and simply observe and listen.” Was creating this piece a way for you to listen to your own ailments, a message for others to do the same, or a bit of both? How does art offer catharsis for either the artist or the viewer?

LUKA BRICO: A lot of people regularly avoid facing their problems through various means of escapism and self-medication. So the primary purpose of this piece would be to send a message to others to stop what they’re doing and listen to themselves. What do you feel and think and why do you feel and think that way? These questions are guides for us to better understand and, therefore, improve ourselves and our lives.

As for myself, I did have a period of a couple of weeks where I questioned and analyzed a lot of my life choices. And although it was a painful couple of weeks, I did achieve peace with myself and a way of thinking that helps me better understand my nature. And so “Alone With Your Fears” also serves as a tribute to that period of my life.

As for catharsis, the viewer achieves it when they manage to understand or identify with the piece.

While the artist can achieve catharsis through properly expressing themselves, seeing your thoughts and feelings reflected in the final version of an art piece is its own reward.

AM: Your piece, “I’m a Free Spirit”, gives off a sense of loneliness and a mystery of whether that is the character’s choice or not. How does an interpretation like that fit what you had in mind for the piece or your own thoughts?

LB: I love it when people have their own interpretations of my work. It gives it a new life. I’ve never looked at the spirit as being forced to be free or thrown out by someone else. But it’s an interesting observation that puts a whole new spin on the story.

My original intention with the piece was to question the modern ideal of being a free spirit. Traveling the world, seeing new places, and meeting new people is exciting, but you do miss out on a few things by doing so. Those who always wander never belong anywhere and those who always travel will have a much harder time investing in and building a sustainable community around themselves. So the piece serves as a warning to those who seek the lifestyle of a free spirit and as a reminder to those who belong where they are to cherish what they have.

AM: “Quiet Time” features a lone character who seems to want to be alone. There is an interesting twist in the waters, however, which adds an intriguing mystery to the art. When you are first thinking of an idea like this, does it start with the character, the environment, or something in between? How does inferred horror like this change what the viewer thinks is going on?

LB: “Quiet Time” was made within a series of artworks where I tried to depict a post-apocalyptic fantasy world. It started as a landscape, and I added the character for scale and the bodies came as an afterthought. A character being alone in such a macabre area was creepy enough. But the surprise in the water helped set the tone for the state of the world depicted, or at least the state of the character’s mind.

It altogether served as a great way to give the viewer a lot of unanswered questions that they can then toy around with in their head. Trying to imagine the past life of the loner in the artwork is sure to give anyone nightmares.

AM: With your piece “Slaughter to Prevail,” you wrote that it is a tribute to the band of the same name. How often does music influence your pieces overall, or your process of creating art?

LB: I’d say music is a vital part of my artistic process. Whenever I’m drawing something I usually have music in the background. I most often listen to extreme genres of metal, followed by symphonic and folk metal, and I occasionally throw in an upbeat tune just for good measure.

But other than being a great companion during my creative process, music also has inspired quite a few pieces. One of my recent ones, “At The Gates of Twilight” (which features an old confused man with a baby, surrounded by disfigured humans), was inspired by a lot of dark ambient black metal I’ve been listening to as of late (mainly Portal).
And I probably would’ve never painted “Holy March” if it wasn’t for Powerwolf. The feeling their music gave me just had to be turned into an illustration.

AM: For your piece “Alien Rage,” you feature a video walk-through from initial rough sketches to the final piece. How important is that initial sketchy foundation compared to creating the rest of a piece? What is your favorite part of the process?

LB: The initial sketch is a recording of an idea, and the idea is the initial guiding light to the artwork. Without the idea, there is no illustration. So the sketch to an illustration is like an early childhood to a person. There is always room to improve or ruin oneself, change course, and so on. But a good start and solid foundations make life easier. The same goes for illustration. A good sketch can answer a lot of questions for the artist, allowing them to solely focus on the execution.

As for my favorite parts of the process, that would probably be the early and late stages. The early stages are related to sketching and exploration, it’s where I am most free and where I can make a lot of changes without wasting effort and time. And the late part of the process feels great when and if I realize that I’ve managed to “pull it off.” Seeing an illustration that looks just like the one you’ve imagined is an amazing feeling!

AM: Thank you so much to Luka for insight into his process and emotion in his artwork. Make sure to visit his website galleries at https://lukabrico.com for his new pieces, including recent work with a unique inked style based on silhouettes and abstract painterly backgrounds. 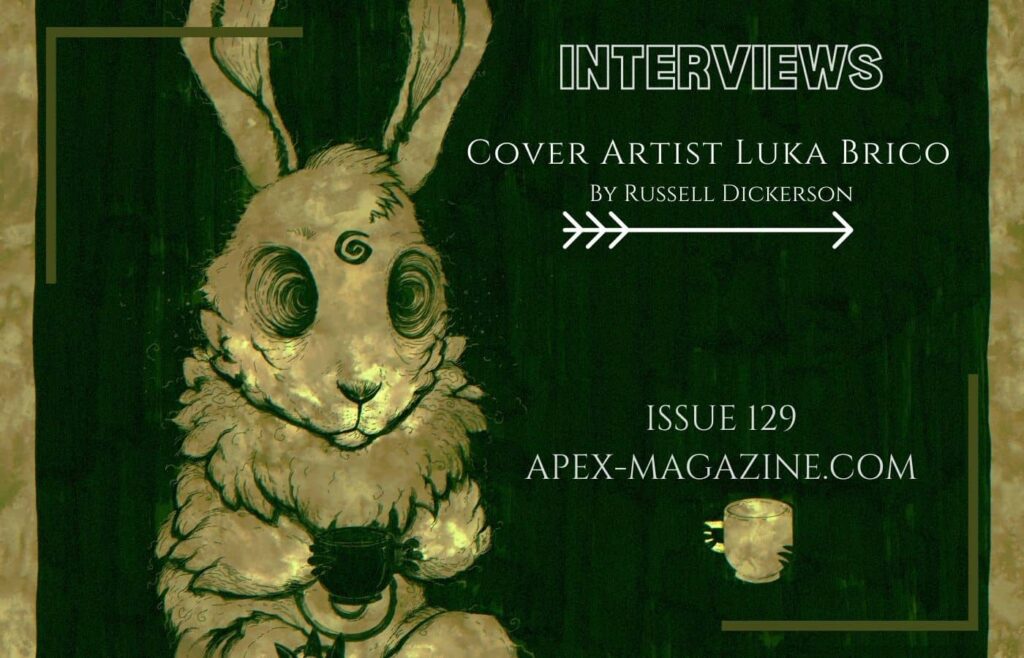