Although this is a story about how a passion for music can turn into a tool of defiance and resistance, I must bring to your attention an observation made by the titular Professor Strong:

“Fragile species that they are, the humans are known to respond to a change in status-quo with anger, frustration, even violence.”

If that isn’t the most on-brand description of humanity, I don’t know what is. We respond to what we don’t know with fear and anger. We easily shoot first and ask questions later. Or, more accurately, we shoot first and then we don’t have to ask questions because there is no one alive left to ask. Singh’s story is milder in tone than this quote leads you to believe, and yet every word, every conversation, every paragraph has this edge that, at any moment, our characters could be destroyed because of their passion for music. Why would we hurt someone for wanting to play a musical instrument in their spare time? Why, indeed.

Singh’s fiction is often told from the point of view of a non-human entity who may be unable to interact with humans at all (“What We Remember,” Syntax & Salt, March 2018), or who offer sympathy and compassion to humans who know fear and anxiety (“Waiting for Karaga,” Truancy Magazine, December 2018). In “Professor Strong and The Brass Boys,” Singh gives us a motley family of robots and allows us to watch as these humanoid robots are given the responsibility to care for and nurture our youth, and yet are seen and treated as soulless servitors.

When Professor Strong discovers the concept of leisure time and combines that with a passion for creating art through music, his human co-workers aren’t sure if he’s crazy or dangerous. Professor Strong isn’t crazy at all, and he is as dangerous as a sleeping kitten. Because he’s a robot, he sees the underlying math in everything. And, if you look under the hood of music, under the key signature, under the swing beats, under the movements of a trombonist or a drummer, guess what you’ll find? Math.

Professor Strong and his fellow robot-musicians play music because they enjoy it. And then they learn that they can use their music to send a message that is beyond any mathematical equation.

The Turing test doesn’t touch the concept of triggering emotions through music, or any kind of evocative, soul-stirring art. But what if it could? Can a robot intelligent understand enough about art and music to create true art, and use it to speak to people? What then?

A foodie who loves parodies and writing fiction from unusual points of view, Amal Singh’s short stories have appeared in Syntax & Salt, Truancy Magazine, and Mithila Review, among others. Recently, his video “If Ganesh Gaitonde Was Your Teacher” won the silver at the Talentrack Awards in Mumbai. Amal was kind enough to chat with me about this story, learning empathy from unexpected points of view, the challenges and joys of writing comedy, and more.

APEX MAGAZINE: I love that Professor Strong and his friends fight anger, fear, and frustration with music. What inspired this story, and what led you to include music?

AMAL SINGH: This story was actually inspired by an illustration my brother did for a music gig. He is a designer/illustrator, and we jam on a lot of story ideas. His illustration featured a robot band with this tall robot choirmaster walking down a flight of stairs. That was enough of a spark! And thus, Professor Lispector Strong was born.

Music was a natural fit. I wanted to tell a story about passion, what would drive a robot to take up music, and how music—and by extension, art—could act as a tool of defiance in troubled times.

AM: Professor Strong is an observant and compassionate instructor of history, who also has a sense of humor. How did you develop his character and his motivation?

AS: After I had the initial germ of the idea, I quickly wrote a draft. I imagined Professor Strong as a history teacher, who is propelled to take up music. The thing is, I hated history in school, and thought the subject was tedious, unless taught by a charismatic teacher. So, yeah, some of those classroom experiences bled into my writing too. Professor Strong learns from his interactions with humans and is a sharp judge of character.

Through Professor Strong’s robot POV, I initially only wanted to explore the idea of “leisure.” But at the same time, I also felt I could probably tell a bigger story and paint a bigger canvas. In Professor Strong’s world, robots aren’t treated fairly. Could a robot come to this realisation gradually, and stand up for what is right? More than that, can a robot truly understand art, practice it, and use it defiantly?

AM: There are a lot of ideas and a lot of set-pieces in this story. Can you walk us through how this all came together, and which parts of the story you wrote first?

AS: This story was such fun to write and went through at least five drafts. The first draft of the story was written in the third person. But the more I read it, I felt it lacked soul. My brother agreed with this too. So, I revamped the story and told it entirely in the first person.

AM: What was your favorite scene in this story to write? Was any party of the story unexpectedly challenging to get just right?

AS: Ah, the last scene where Professor Strong gives a glance to Professor Taslima and takes the stage! That remains my favourite. Mostly because that was the moment all the pieces fit together.

The scene where Professor Strong and Yuyu—the small worker droid—are practicing and are later caught. That was challenging, and also emotional, because it tackled a lot of themes. Even writing it, I felt devastated for Yuyu. A tiny worker droid, who steals time from his work to practice drums, who probably only wants to do it for fun, is suddenly roped in by this respected professor to play music. But the world the robots live in is cruel. Yuyu is soon decommissioned. This was a key scene because it also acts as a final motivation for Professor Strong.

AM: You often write about non-human entities (intelligent walls, a friendly lake, robots) who have interactions with humans. Why is this theme interesting for you to explore?

AS: I was introduced to science fiction through Ray Bradbury’s stories, and one of my all-time favourite stories is “There Will Come Soft Rains,” which features a sentient house. It’s an incredibly moving and incredibly sad story, and something about it latched on to me. I often feel that through a different, outsider lens, we can explore the human condition deeply. Perhaps through a different POV, we can truly understand empathy, and this is what drives me to explore such themes.

AM: You also write comedy sketches. Do you see any similarities between comedy and science fiction?

AS: I feel comedy is the toughest genre to write in. It takes a lot of effort to make someone laugh, truly laugh. Since my videos and sketches go on YouTube, I get feedback through views, reactions, and comments, in real time. Writing comedy has definitely helped me in writing crisp dialogue, which seeps into my stories, as well. I also hugely admire Terry Pratchett, Douglas Adams, and Connie Willis, who combined comedy and sci-fi and flew away with it.

AM: Congratulations on the video you co-wrote, “If Ganesh Gaitonde Was Your Teacher,” which recently won a silver at the Talentrack Awards in Mumbai. What can you tell us about the inspiration for your award-winning video, and your experience of working on this project?

AS: This video was an absolute blast to write. Ganesh Gaitonde is a character from the hugely popular Indian Netflix series Sacred Games (based on Vikram Chandra’s novel). He is a ruthless Mumbai gangster who has a god-complex and speaks in idioms. So, of course, we decided to parody the hell out of him. We cracked a story where he is put in charge of a school and teaches the students to become “cool” like him.

AM: Somehow, in between writing short stories, sketches, short films, and working on your other projects, you find time to experiment in the kitchen! I, too, am a fan of improvising in the kitchen. Any funny stories you’d like to share about recent cooking adventures that went surprisingly well, or hilariously poorly?

AS: Cooking is therapeutic for me and is a great cure for writer’s block. I am a big fan of cooking channels like Binging with Babish, Food Wishes, Tasty, and love to replicate those dishes in the kitchen. So, naturally, one day I decided to take up baking. And since I love a challenge, I didn’t start small—I decided to make babka!

Plot Twist: I didn’t have an oven. So, I improvised. I prepared two batches. I put one in a Pressure Cooker and the other in a steam bath. I had a disaster with former and was partly successful with the latter. The meaning of “successful” here is that the babka tasted remotely of bread with a hint of chocolate. Learning—baking without an oven is tough!

AM: I would absolutely eat that babka! Thanks, Amal! 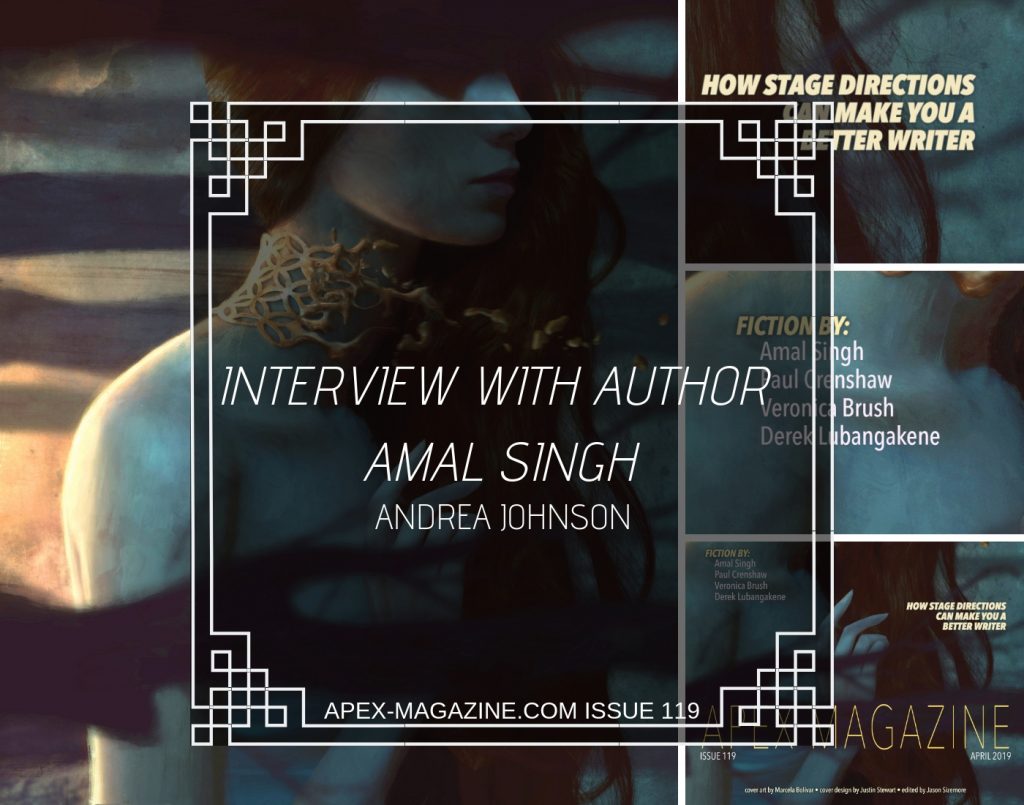