Cover Artist Interview with May and Sin5 min read

Home » Interviews » Cover Artist Interview with May and Sin

This month’s cover artists are May & Sin, a team inseparable since they met online in 2012 through an art gallery. Drawn together through art, both in life and as creators, they create marvelous, anthropomorphic art set in fully realized fantasy worlds.

APEX MAGAZINE: Beauty and horror are balanced perfectly in “Under Hollow,” your cover art for this month’s issue. Does the grotesque in a piece like this compliment the beauty, or are they more in opposition? Are you hoping for a particular interpretation or reaction from the audience?

MAY & SIN: We both would agree that there’s a lot of beauty in the grotesque. We draw things of this sort because we personally find them appealing and fun to work with. Beauty is a complex and subjective concept, after all. We both have always been attracted to things that aren’t conventionally pretty and try to do our best to explore them and portray them well. We don’t really expect any particular reaction from the audience. If people like what we draw, we are happy. However, we completely understand it might not be everyone’s cup of tea.

AM: Many of your pieces are of anthropomorphic creatures, such as your character sketches for Aiden and Darcia. How do you approach a balance of the animal/creature side with the human look and feel? Are there many iterations before you settle on how a character looks?

M&S: Throughout the years, we actually went through many iterations on what our “head world” people would look like. While we both hail from the furry community, and combining animal and human features would be a given, there’s actually so much variety in how you can mix those. Finding the perfect balance between animal and human features was hard. We could say that we are happy with our current designs, but they changed so much over the years and there’s no guarantee they won’t change again. As long as this journey was, it was an interesting one. We like animals, but we also like various cultural and historical themes. It was always a challenge to combine the two while keeping it mostly sensible, even in a fictional setting. For all it’s worth, it’s a purely aesthetic choice.

AM: In the description for your piece “Conservatory,” you discuss how technology, particularly the differences between Adobe Creative Cloud and Creative Suite 5, can be challenging. How do the tools you use help or even interfere with the creative process? Have you abandoned ideas on days where the technology has not performed well, or even spent extra hours on a piece because everything was working perfectly?

SIN:  I find that software never particularly made a huge impact on my personal performance. But I remember that day I had to upgrade to a newer version of Photoshop because the old one simply wouldn’t perform stably, anymore, on Windows 10. The notable improvements were a matter of convenience, mostly things such as improved stability and fewer crashes. The software simply would perform much better under the stress of large, layered documents for personal art, as well as work.

AM:  Mythology seems to play a strong role in your work, from dragons to kelpies and beyond. Are there particular mythologies that are your favorites, or others you would like to explore? Are there times where a certain myth might help you start a piece, but it heads off in a completely different direction?

M&S:  We definitely love all sorts of mythologies, starting from the very obvious classical ones, such as Greek, Norse, and such, to a bit less explored, like Slavic (and Native ones for May). There’s a lot of oddity and freedom to interpret in the images, and even just thinking about myths and legends superficially can bring up a lot of inspiration. It’s always fun to try and bring some personal touch to those, too, be it an attempt to provide a more realistic approach to visual narrative or a more psychedelic one. It’s something we definitely should explore more in the future.

AM:  Your piece “Red Sphinx” was recently featured as a “Daily Deviation” on DeviantArt. Has that helped to garner attention for your work, or attract more followers? How important is a community like DeviantArt to artists and other creators, compared with social media like Facebook?

MAY: I think I have been on DeviantArt for about nine years now, if not more, and throughout my time on there, I got a few Daily Deviations. It’s a very nice gesture on the site’s part to feature random artwork like this. But throughout the years, DeviantArt changed in a way that makes it so these features bring barely any exposure at all. The way it used to work was that Daily Deviations were displayed on the bottom of any page on DeviantArt, in randomized order, so people would see them a lot. Now, people need to go to a separate page for that, and not many do it. I can’t say it’s a bad decision, because it allows for a cleaner browsing experience, but it’s not as much of a boost as it once was.

I never used Facebook, but I recently started using Twitter for art sharing. I found it to be a very nice platform, for both discovery of new artists and for showcasing my own work as well. While I’m used to gallery sites, I am growing to appreciate the new ways of sharing art that cropped up through modern social media because they helped me to discover many new and amazing artists!

That said, I think gallery sites are still nice to keep up, because they provide a better overview of one’s work, rather than a timeline on something like Twitter or Facebook. You have better control of quality, resolution, and cropping of the work you are uploading on a gallery site, which is very important.

M&S: We want to thank Apex Magazine for this feature and the cover, and all of the people out there reading it!

AM: Thank you both for the insightful interview. Readers can find more of May & Sin’s work in their joint galleries on DeviantArt4 and Tumblr5 and on their separate twitter accounts: twitter.com/hanghul (May) and twitter.com/lamentobento (Sin). 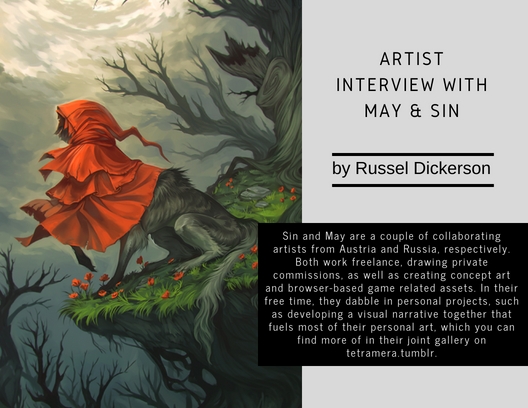