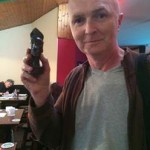 Originally from Liverpool, UK, John Paul Davies now lives in County Meath, Ireland, where he is an active member of Crow Road Writers (Twitter: @crow_rd_writers). His work has been published in The Fog Horn, Rosebud, The Pedestal, Grasslimb, Pseudopod, Ares Magazine, QU Literary Magazine, and is forthcoming from Grain Magazine. A poem of his is displayed in the finest pub in Liverpool, The Ship & Mitre.

In the early days when you first went into space, aboard a space station, you spent time with trained astronauts. How did their company impact on your initial sojourn beyond the Earth?

While on the space station you helped to facilitate an experiment in which you attempted to construct a web in zero gravity. Your first attempts were fairly dismal. Did this in any way diminish your sense of identity as a house spider?

Eventually you not only succeeded but developed a new web design suited to gravity-free environments. As a result we realised that house spiders cope far better with zero gravity than humans. Was this when you began to realise your superiority over us?

Sometime after returning to Earth you were cloned and re-engineered into your current omni-immortal state and were at the forefront of web rocket and web space-city architectural design. You are currently building an elastic bridge between Mercury and Venus. How insignificant do you consider us now?

Thank you for taking the time to answer our questions.