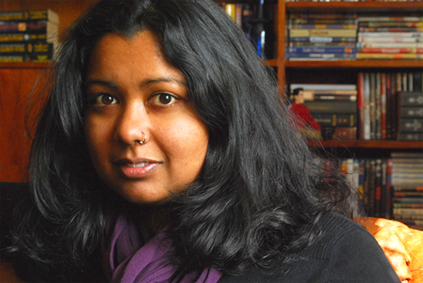 Loraine Sammy’s involvement in the online creative world has taken her across the United States, attending conventions and conferences for multiple fandoms and cultural media events. As co–founder of racebending.com, she has done various presentations and panels on equal representation in modern entertainment, encouraging active participation from media consumers. However, her one true passion is rooted in the world of art and artists. As a professional and freelance illustrator, Loraine is endlessly fascinated by the wide impact that visual creativity has on our society, and vice versa. Ultimately, it is artistic diversity that keeps Loraine enthralled by the wonder of our collective human imagination.She currently lives in Vancouver, BC — but this particular Canadian is neither mild nor apologetic, eh. Her website: lorainesammy.com.

Mehrdad Isvandi came to Apex’s attention on Tumblr, where his work stands out in both attention to detail and innovative themes. We are pleased that he had the time for this interview with Loraine Sammy.

APEX MAGAZINE: Can you tell us a little bit about yourself as a concept artist and designer?

MI: My name is Mehrdad Isvandi. I was born in 1985 in Ahvaz, Iran. Since childhood I’ve had a strong interest in visual arts and drawing. I entered university to major in Graphics. Later on I felt this potential could flourish as a designer, so I decided to enter the animation industry where I began to have my own style. In 2004 I started as an animator, later moving to the background painting department in 2006. Since then I continued as a concept artist for several animated series and movies. I moved to San Francisco in 2013 and now my emphasis is on visual development for games and animation.

AM: Your piece ‘Time to Be Zebra’ is very striking and looks like it has an interesting idea behind it. What was your motivation for painting this? What does this painting mean to you as an artist?

MI: I had a visit to the San Francisco Zoo, where I felt that there might be somehow a similar pattern between zebras and tigers. While I had this idea in the back of my head, one of my instructors, Lisa Berrete, gave us an assignment to create an illustration with a short story behind it. So I did lots of different sketches of a tiger changing its appearance to zebra. It has a funny story behind it: this tiger is going to wear the zebra mask, to get ready for gambling with other zebras. At first I did it with charcoal and then my instructor encouraged me to develop it, so for the final I polished it by painting with Photoshop.

AM: Looking through your art blog I noticed you do a lot of background and landscape art. They are incredible. What inspires you to create such beautiful background paintings? What are your influences and inspirations for basing the architecture in these fantastical pieces?

MI: Thanks. As I was working on different projects back in my country, there were many background pieces on my blog that were used for animation production, animated series, movies, and games.  Also, many of them are just personal and what I tend to do during different periods of time.

Mostly I’m inspired by the European Orientalist art movement from the 19th century, and also Native American arts and ancient African art seem interesting to me. For more stylized art work I’m inspired by Armand Serrano, Evind Earle, Robert Valley, and lots of other great artists who are currently working in the animation and game industry.

AM: I noticed that you also do some 3D modeling and also sculpting. You have a very wide scope of skillsets. What sort of assets does an artist need when working in the visual development industry?

MI: Well yes, I use 2D sculpting to convey my ideas and a few times I’ve used 3D for reaching better perspective and painted over them digitally. However, my emphasis is on 2D drawing whether digitally or traditionally. Besides using a medium, a visual development artist should pay much attention to details around the art and use references in an effective way. They develop ideas and, by thinking out of the box, create pieces of art that should be believable and readable to audiences.

AM: One aspect of your art that I really love is your ability to light a scene and create a feeling of room and space. Do you have a specific artistic process when you paint?

MI: It depends on the subject and the mood of the story. However, many times I begin by looking at Baroque and classical paintings. Also I look at many masterpieces and try to analyze them; studying art works are so instructive and helpful. The process begins with thumbnails and testing different composition. In composition I also include lighting as well. I choose from one of the thumbnails and draw it bigger with more details and make it ready for painting. Many times I come with an idea that I like, then I just start with color sketching and try to have fun with it.

AM: What do you love about creating artwork in the genres of fantasy, science fiction, and horror?

MI: I like the process of creation more than specific genres. I could choose any of the genres and start my research about it… well I like flexibility.

AM: Thank you, Mehrdad! It’s our pleasure to have you in Apex.