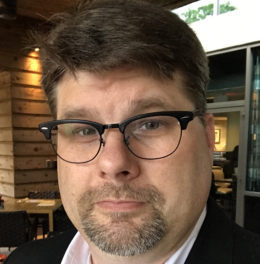 Will Ludwigsen’s work has appeared in Asimov’s Science Fiction, Weird Tales, Cemetery Dance, Strange Horizons, the Interfictions 2 anthology, and many other places. A 2011 graduate of the University of Southern Maine’s Stonecoast MFA program in popular fiction, he currently lives in Jacksonville, Florida, with writer Aimee Payne. He blogs frequently at www.will-ludwigsen.com, including a series of weekly short stories.

The universe began 13.7 billion years ago as a singularity of infinite density and temperature. It will expand and fragment until the fragments become singularities of their own and repeat the process. The grand unified theory is a lot closer to “it’s turtles all the way down” than scientists guess.

The Earth will end with a bang and not a whimper.

Life is common in the universe, but intelligent life is not. What little of it exists uses neither radio nor space travel. Four percent of Earth’s species originated elsewhere, arriving via meteorite to evolve here. No one has ever been abducted by aliens.

No dead person has ever communicated with a living one. Ghosts are not the spirits of the dead but cross-consciousness memories to which sensitive minds have non-chronological access. The few true psychics have this ability, though only three percent of those who claim to be are. John Edward isn’t. You are, slightly.

The creature in Loch Ness was a plesiosaur, but it died in 1976 and locals concealed the carcass. No feral simian or missing link has ever been photographed. The Mayans died of a pandemic hemorrhagic fever. Atlantis was the island of Crete.

All conceptions of God are produced by the limitations of human neuroses. A true holy book could fit on an index card, but most of the words on it haven’t been invented yet. Religions are clumsy metaphors for epiphanous experiences, often the result of errant chemicals or electrical impulses. Sometimes, though, they illuminate the truth just as parallax calculates the distance to the stars.

Shakespeare’s audiences wrote all the plays of Shakespeare: their reactions shaped what actors remembered in each successive performance until they were finally written down. The Voynich Manuscript was an opium addict’s dream journal.

Lizzie Borden did it, and her sister knew. Georg Jaffe, a Jewish immigrant tailor living in London’s East End, performed the killings ascribed to Jack the Ripper before lapsing into gibbering mental incompetence and dying of syphilis. Bruno Hauptman didn’t kidnap Charles Lindbergh Junior alone, but his accomplice had long since died when he went to trial. Arthur Leigh Allen was the Zodiac.

Amelia Earhart and Fred Noonan lived four days on Gardner Island after ditching their plane there, eventually dying of thirst and exposure. U-869 was attempting to defect to the United States in February 1945 when it was sunk by U-857 off the coast of New Jersey. Marilyn Monroe died of an accidental reaction between medications prescribed by two different doctors.

D.B. Cooper’s skull lies beneath seven feet of leaves and loam in a bear cave in the Cascades, along with $140,000 of his ransom money. British troops hid half a million pounds of bullion in the Oak Island money pit in 1779 and recovered it in 1781. Their commander ordered the pit restored as a punishment to “traitorous colonial Wretches too greedy to pay His Majesty’s due.”

President Kennedy was shot non-fatally by Lee Harvey Oswald but then killed accidentally by a Secret Service agent. Flushed with adrenaline, the agent slipped off the curb while rushing to the limousine with his weapon drawn. Because Oswald fired the initiating shot, the FBI, CIA, and Treasury Department felt justified in leading all investigations to him.

After the September 11 attacks, Al Qaeda never again had the capability to execute an attack of similar magnitude. Osama bin Laden was horribly disfigured by a thermobaric bomb blast at Tora Bora in late 2001.

Two and a half million years ago, one of your ancestors invented the spoon. You had a relative who fought at Actium. Your great-great grandmother shook Abraham Lincoln’s hand and reported it was “clammy.” Bernard Theerian remembered the chocolate bar your grandfather gave him in Paris on August 29th, 1944, as the best he had tasted all his life.

Your parents did indeed meet at church, but only after your father locked your mother in the Sunday School room and charged her a kiss to let her escape. Years later, your mother only relented to his charms for rides along the seashore in his new white MG.

Your father wanted to be an architect but stopped trying after a rejection from the Rhode Island School of Design. He majored in Sociology instead because everybody was hoping to change the world back then. He drew houses on napkins the rest of his life. Your mother wanted to be a botanist but flunked organic chemistry.

Theresa never wanted to be your big sister, and she resented your parents for making her raise you. Once while babysitting, she prayed tearfully that you’d just die. She felt terrible about it for the rest of her life.

Buddy forgave you for yanking his ears that time in the pool. A boy named Damon Phillips stole your bicycle in the fourth grade, but he took better care of it. The angry old man living across the street wasn’t a Nazi but a Russian; he did poison Pippi for sniffing around in his garden, though. The fat girl at your summer camp killed herself the next fall.

Your parents knew that you borrowed the magazines they kept under their bed.

Heather Duncan would certainly have gone to the ninth grade dance with you. That gangly hick with the bad moustache who spat tobacco on you at the pep rally is on Death Row. You could have gotten another hundred points on the SAT if your mother had breast-fed you in your infancy.

Your guidance counselor confused you with another student when she advised you to work toward an exciting career in computers. You would have been terrible at it if you’d tried. Careers for which you were better suited were counselor, attorney, or teacher.

Theresa would also have been an excellent teacher. Her last memories were of spooking her little brother while watching episodes of In Search Of together in the basement.

Your teachers didn’t know how to help you, after. Mister Bailey didn’t realize that the D in Physics would ruin your university scholarship. Dean Findley thought a military school would help, but your parents couldn’t afford it. Everybody knew you broke the office windows.

Meeting Lieutenant Vercek at the career fair saved your life.

Over the course of your career in Homicide, your work resulted in the arrests of six hundred and twenty people. Two hundred and fifty-four were guilty but exonerated. Ninety-six were innocent but convicted anyway. Of those, forty-four were guilty of other crimes. Only thirty-one percent served their entire terms in prison. Of those released, more than half killed again.

Jacques Hermann didn’t kill those girls. You were right that Vernon Gene Johnson hid Sandy Berensen within view of the nursery window. Her body was floating about three hundred yards away in an old septic tank and finding it would have cinched the case. Ervin Mitchell kept the photos of his rapes under the carpet in his father’s doughnut truck for which you never got a warrant. Those garbled tapes discovered in Francis Shenck’s cabin were recordings of his victims’ tortured screams for his later fantasies. Gary Thorton still wants to eat you.

You arrested more black men than any other race or gender, but you couldn’t help it.

Two people vowed to kill you over the course of your life. Neither could have done it. Francis Shenck’s daughter was a terrible shot, and Gavin Drummond forgot after the third grade.

Sharon’s parents never liked you as much as they did her last boyfriend. They took them both to dinner when you divorced. She is happy now but she doesn’t regret marrying you. Sometimes she misses those lazy summer naps and midnight trips to Krispy Kreme.

Your daughter lost her virginity in your favorite chair with that dorky drum major. She made him wear his hat. Your boss’s boss thinks your last name is Gilbert. That UFO you saw in the mountains was a Russian satellite burning up on reentry. The creepy man you saw at Disney World wasn’t a child molester.

The man at whom you shot the bird for cutting you off in traffic on December 16, 1996, was on the way to his wedding. The dent in your rear fender from August 2001 was inflicted by an uninsured college student who couldn’t afford to repair the damage. Six times in your life you have eaten fast food tainted with the body fluids of bitter service employees.

Sixteen across on the USA Today crossword puzzle from August 3, 1991 was “ibix.” All your mother really wanted for Christmas was a subscription to Vanity Fair instead of all those cheese platters. You routinely used the word “flammable” when you meant to say “inflammable.”

No one could ever love you enough, but Jennifer Harris came the closest. She still thinks about you and your kiss beneath the pier on prom night.

Your greatest strength is your desire to ask all the big questions. Your greatest weakness is your fear of asking the little ones.

Theresa lies face down in a grave near the 165-mile marker on Interstate 95 in South Carolina. Her murderer, a councilman for nearby Florence, chuckles when he drives his Cadillac Escalade past her grave. His only motive was convenience, and there was no way to catch him.

Nothing you’ve done would disappoint her.