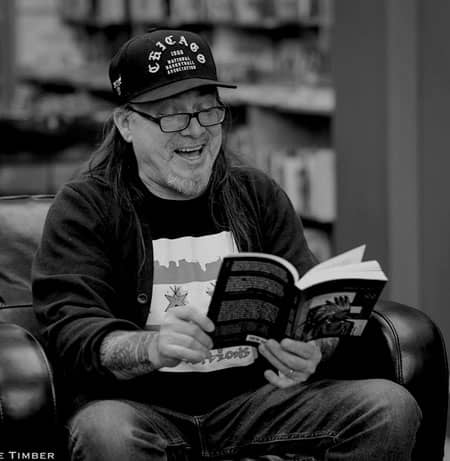 Theodore C. Van Alst, Jr.’s mosaic novel about sort of growing up in Chicago, Sacred Smokes, winner of the 2019 Tillie Olsen Award for Creative Writing, is now in its second printing. His next work, Sacred City, will be published Fall 2021, also by the University of New Mexico Press, who released his edited volume The Faster Redder Road: The Best UnAmerican Stories of Stephen Graham Jones. He is the creative editor for Transmotion (a journal of postmodern Indigenous studies) and an Active Horror Writers Association member. His fiction and photography have been published in Southwest Review, The Raven Chronicles, Red Earth Review, The Journal of Working-Class Studies, Unnerving Magazine, The Rumpus, Electric Literature, and Yellow Medicine Review, among others. You can find him on Twitter @TVAyyyy.

When Coyote wound round his tail twice and laughed, loped through the six-way intersection at Lincoln, Belmont, and Ashland, he never thought so many humans would die.

Sure, he was drunk, but it was St. Paddy’s on a Friday downtown and everyone was shit-faced. He stood on his hind legs and felt around up top; he remembered a Northwest side girl full of freckles and big blonde hair sticking one of those green felt derbies on his head, but it seemed to have fallen off somewhere. He had been hitting on her, trying to use his legendary dog magic, but she wasn’t buzzed enough to understand him. Then her big doofus, Brendan, showed up with a couple green beers in hand, thought he was some stray trying to give her rabies, and kicked him good in the ribs. Coyote tried to bite him but missed, slunk away, eyes already peeled for another shot.

He padded around outside the Riverwalk bars, people pouring beers on the ground for him. Embarrassing, yeah, but he wasn’t drunk enough yet to show them he could sit up in a café chair, drink right out of a plastic cup if he wanted, even if it freaked people out every time, got him in trouble with Creator for showing off. He licked up a couple puddles, wondered how he could get someone to dump a shot of whiskey for him, and watched architecture tour boats chock full of suburbanites and other foreigners putt on by. He alternated arching his eyebrows, lolled his big pink tongue out long past his black lips, felt the spit on his teeth dry in the breeze off the Chicago River. He was glad it was warm, way nicer than usual for March, but winced at the thought that every spring seemed warmer than the last. These humans were fucking it up quick-like and there didn’t seem to be any way to stop it. He left it, like most things, in Creator’s hands and went back to thinking Coyote thoughts, the only thing he was actually bound to do.

Right now, those wiggedy deliberations were bugging him to get laid, a proposition way easier for him as a human. Man, there were like three coyote women on the whole Northside, and they were too busy with their kids to spend any time with him. He’d tried plenty of times, been shut out even more.

The problem was that he was too fucked up to figure out how to switch to human form. He knew there were a couple of things he needed to say, but they had to be recited in a certain order, and it required a couple of stones, he thought maybe, but if it did, he’d lost those. And some tobacco, something else he didn’t have. Shiiiit, he confirmed. I’m a mess.

He should probably go find Jimmy and Tommy, those little shits. They’d know what to do. He’d given them the story so they’d know how to call him back in case he got too fucked up. But Uptown was such a haul from here, and he’d already run the whole way along the big water from downtown. Heading west from the lakefront, he drank himself up Belmont, a dive bar here, a gay bar there, a hole in the wall, a couple music joints with metalheads and folk nerds out front, all of them quick to give a coyote a drink. He was smashed.

By the time he’d crested one of Chicago’s few inclines up to Ashland, all four legs were moving independently of each other. And he’d puked two or three times, ate it at least once.

But this fuzzy urge kept at him, worried his mind. The migratory patterns, the hunting trails, the well-worn paths embedded deep in his soul gnawed at his heart. Those paths crossed with Fox’s and Possum’s and Skunk’s plenty of times, but he ignored them, didn’t bother to talk with all of those trying to survive in the city as well. It wasn’t because he didn’t have time; it was just that Coyote was an asshole and couldn’t be bothered. He preferred to be alone, and lonely with his thoughts. He had slunk every sidewalk on the Northside, but it was the old Indian trails that pulled at him; Archer, Ogden, Milwaukee, Clybourn, Lincoln, and Elston Avenues, even Route 66, maybe the grandest trail of all, every angled street in the city that spoked out from the lake and the old trading centers were paths drawing his paws in undeniable ways.

That’s how it was with Lincoln Avenue, his most favorite, the one that had been yuppified more than any other. As he made his way west toward it on Belmont, he could see it in his mind’s eye, vintage neon, yellow-blue arc light, broad and angled, heading northwest in sensible ways, cutting across a square-gridded city that slept in silence, dreamed deeper than it knew, its diagonal paths leading to an angry past, a history that simmered unknown below a surface hot-topped over a massacre, a burnt fort, rebellion, and resistance that smoldered like a root fire in its unsung fields, sighing prairies that sang on summer nights for those who knew how to listen, the city’s Indigenous citizens’ palms raised to the big water in the east, eyes smiling closed at a history not yet written, a book of Native reclamation close at hand.

Coyote held their hearts close to his own as he waltzed into the intersection, standing tall on two legs. He drew down all the magic in the air with him as he made his way, the six stoplights of the intersection responding in flashing red, green, and yellow, wild as his own heart demanded. Cars screeched and swerved in response, rolling and howling, a late model Caprice smashed a vintage Bel Air, two Crown Vics, black and maroon, skittered into a banana yellow Mustang and an old box truck, a crusty Dodge pickup broadsided a creamy Plymouth Voyager as a red Jeep Cherokee stood on its brakes, too late to avoid a scrubby blue Mazda Navajo pushed sideways across Ashland, all four tires blistering skid marks into the pavement. White faces screamed through shattering glass, windshields, and blood by the bucket splashed onto the blacktop. Limbs twisted and flashed, pale and crimson-streaked, thrown at the last second across eyes that rolled to avoid seeing onrushing sidewalks and light poles. Bodies crumpled half in and out of spidering windows and puckered doors, mayhem reigning supreme.

Coyote twirled, again and again, laughing in a way they’d get all wrong on the newscasts, the pure joy he felt lost on their unknowing ways of looking at the world, chaos the only true expression of love he knew.

Just wait ’til the Southside Irish Parade tomorrow, he thought. Western Avenue was gonna be wild.