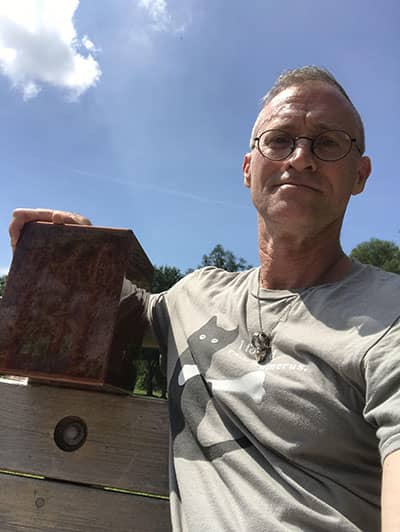 Ken MacGregor writes stuff. Sometimes, he edits stuff too. He has two story collections, an award-winning young adult novella, a co-written novel, and is a member of the Great Lakes Association of Horror Writers (GLAHW). He is a somewhat regular contributor to Horror Tree with his column Brain Babies. He has also written TV commercials, sketch comedy, a music video, some mediocre poetry, and a zombie movie. Ken is the Managing Editor of Collections and Anthologies for LVP Publications. He’s also curated two original anthologies. When not writing, Ken drives the bookmobile for his local library. He lives with his kids, two cats, and the ashes of his wife. He can be found at kenmacgregor.com and on Twitter @kenmacgregor.

Cruising through western Michigan toward the lake for a family outing, under flawless spring skies and passing the odd barn or silo, a sign catches my eye, half-obscured by a huge lilac bush: Flesh Eggs.

My foot eases off the gas a bit but my brain is working overtime. Did I really read that?  As my hands unconsciously guide the wheel and my foot returns pressure to the pedal, the monotonous travel propels the images in my mind.

They sit, clustered in a stainless-steel bowl, freshly plucked from under the birds in the coop. These are no ordinary chickens. Visible beneath their feathers, they ripple with avian muscle. Their talons can slice through tin. Tiny, razor-sharp teeth line their beaks; they use them to strip the meat from the bones of their prey. When the word omnivore is used for them, it is with a shudder of revulsion and no small amount of fear.

The eggs themselves come in a range of colors, from a cream so pale it’s almost white to a brown so dark it’s nearly black, shades between dotting the spectrum. Veins turn the surfaces into maps, tinted bluish in the light, highly visible on the paler eggs. Hold one in your hand, and you can feel the warmth of ideas, and, faintly, the thrum of life within.

When you cut the egg (you can’t crack flesh eggs), you let a thin stream of blood pool out, then you tear the egg open, dropping the translucent fluid and golden yolk into a pan. It sizzles and smells vaguely earthy. Like fresh compost, but washed, not decayed. In the puddle of butter, the flesh egg becomes solid; the clear gels to white and the yolk a yellow so bright it hurts to look at.

These eggs taste sweet and vaguely gamey. A single one contains a whole day’s worth of nourishment. You can feel yourself getting full with each bite like it’s expanding in your belly, becoming more than went in.

Those who farm flesh eggs must wear protective gear, armored to the shoulder, or risk losing bits of themselves to demanding vicious chickens. Still, there’s the occasional accident. Old Mr. Thomason is missing his left eye. Billie Hancock speaks with an electrolarynx because she got a little too close. Another half-inch and Billie would have been chicken feed.

Clearly, this is an instance of having to break more than just a few eggs to make an omelet. Sometimes, you might also lose a finger or a chunk of cheek. But maybe the danger is part of the appeal. The risk, the experience, its own reward.

I get another ten miles closer to Lake Michigan and pull over at a farm stand—selling much safer wares—to pick up some corn for tonight’s dinner. After a pleasant exchange about my bumper sticker (“I read to my child”) and the weather, I turn the car back the way I came. I simply have to get some flesh eggs for tomorrow’s breakfast. Are there protestations from small bodies in the back seat? Yes. But only the very best for my family.

I pull into the drive, along a winding dirt path, barely wide enough to accommodate my small car. The trees open to reveal a sprawling farm; the rank smell of livestock is nearly overpowering. The day is growing uncomfortably warm, as it sometimes does; feels like ninety already. A woman comes out of the house. It’s white, in desperate need of new paint. The screen door bangs loudly once and softer a second time. Her face is deeply lined. There is dirt under her short nails. She smiles.

She stares for at least three whole seconds.

I can feel the heat climbing my neck. From where I’m standing, I can see the chicken coop. Normal non-Cronenbergian hens scuttle around, pecking endlessly for morsels of food. I stammer an apology and sheepishly buy a dozen completely normal fresh eggs. I give her an extra $5.

On the way out, I look again at the handwritten sign. Fresh Eggs. The r is a little sloppy maybe, but it’s clearly not an l.

This happens to me a lot. This is what my brain does. It looks at the world … wrong. In some ways, this is incredibly inconvenient and frequently embarrassing. However, it’s also the reason I can write stories. It’s that weird little misfiring of synapses, that oddball interpretation, that makes the speculative fiction sing.

Maybe it’s a holdover from childhood, the way we all do this when we’re young, open to possibilities, willing to suspend disbelief at the drop of a hat. I never quite lost that quality, though it’s been dulled by adulthood, paled by experience. We reach middle-age, but some of us still look at the world with a sense of wonder, whether we’re creative or not. Whether we’re writers of horror, science fiction, fantasy, or any blending thereof we find beauty in a sunset; poetry in a flower; terror in the movement of an insect’s legs. That childlike awe at the world hasn’t quite been carved out of me, no matter how jaded I may be. Hopefully not out of any one of you, either.

I have tried to cultivate this sideways vision to some extent. Or, at least, to give it free rein. I’m happy to be that weirdo who notices the tiny detail that’s just off. That which doesn’t fit in. The twisted root at the base of the tree that might be a goblin hiding. The reflection in the window that looks exactly like my dead grandfather’s angry face. The way that car is looking at me, malevolent intent clear in its headlight eyes. I try to create an environment of oddities from the real world, then transfer some sense of that to paper.

Every farm stand along every road, the random, misread typos, and the overmisheard snatches of conversation, lead to ideas, which, in turn, lead to stories. Being open to the unusual is crucial in a creative. Tuning your senses to catch the bizarre adds spice to your output. To carry the analogy further, flesh eggs taste oh-so-much better when they’re seasoned with gestalt and pepper, with a dash of oregano and a pinch of time.

Learn to embrace the odd. Absorb it. Use it. Let it drive your work. If nothing else, it’ll knock you out of your comfort zone, which is a great goal to shoot for. Reach way back to your childhood, when there were actual monsters in the closet, when you really did get superpowers just because you wore the cape. Dip into the font of imagination that once geysered out of you but may now only trickle. It flows still. I promise. Maybe, just maybe, if you drink from it more often, you’ll nudge some of the debris loose and it’ll stream along faster and faster.

Even if it only ever dribbles through, go ahead and slake your thirst. Even a little taste of pure creative joy is better than nothing.

I think that perhaps especially now, as we come out on the other side of a world-altering, global experience, we are maybe in a better position to tap into this part of ourselves. We’ve been held captive by a terrifying pandemic, seen the most confounding aspects of the underbelly of humanity. Wouldn’t it be nice to hang out with our inner children? Let them take the reins. Let them dictate the story. Give up some of our adult control and responsibility and just … play.

When I finally get to the big lake, we grill burgers and corn on the cob for dinner, along with sugar snap peas, which are everyone’s favorite; the younger spawn calls them Viking Boats. The next morning, we have fresh eggs, scrambled, and I tell my family the story of the horrible, omnivorous chickens. Instead of being excited for the wonders of my imagination, they of course ask why the hell I had to bring this up while they are eating.

Secretly, I’m sure they love it.

Maybe that’s how we as a community of writers, editors, and excitable word people keep our eyes peeled for the weird: stories told at inopportune moments about odd things to a captive, eager audience. We embrace the necessity for those stories; we write them, we read them; we keep the imaginative narrative of the world going on.

Never lose your inner weirdo. Notice the oddball things around you, make your life more interesting. I hope you catch the typos that make you wonder. I hope the tiny imps and shadow creatures reveal just a hint of themselves to spark wonder in your mind.

May all your eggs be flesh.