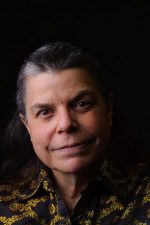 F.J. Bergmann is the editor of Star*Line, the journal of the Science Fiction Poetry Association, and the poetry editor of Mobius: The Journal of Social Change and imagines tragedies on exoplanets.

Their hives were castles of yellow sulfur;
their language, a barrage of white noise.
Even their house pets had wheeled feet
or huge faceted eyes the color of moons
rising on our home world. Their excreta
glowed in the dark, illuminating convoys
of nocturnal harvest workers and trade
caravans. They still refused to cross
desiccated lowlands where ancient seas
had once swarmed with carnivores
whose monstrous forms were depicted
in the underground temples. In near-
darkness the nervous lamps cast light
upward on thousands of immense replicas
of those extinct creatures, suspended
in eternal twilight. Sometimes the hollow,
lacy shells of golden wire appeared to be
nothing more than ravenous mouths.
We asked, Why worship what harmed you?
© F.J. Bergmann