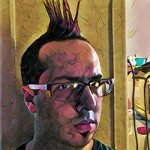 Daniel I. Russell has been featured publications such as The Zombie Feed, Pseudopod, and Andromeda Spaceways Inflight Magazine. Author of Samhane, Come Into Darkness, Critique, Mother’s Boys, The Collector, Retard, and Tricks, Mischief and Mayhem. His latest novel, Entertaining Demons, was released in 2017 with Apex Book Company. Daniel lives in Western Australia with his partner and four children, and is so very, very close to completing a BA in psychology and counselling.

‘Life is neither good or evil, but only a place for good and evil.’

Writers like to play around with the concept of evil, don’t we? Think of some of the great antagonists: Sauron and Voldermort in their quests for total power and dominance; the criminal mastermind of Professor Moriarty; even the endless hunger and carnage of Benchley’s Jaws. Most definitions of the word evil state immorality and wickedness as the main concepts. But is it for the writer to deem if a character is wicked … or the reader?

After a few of my writer friends had a mini tirade regarding the shallowness of the Friday the 13th franchise, I set out to write a short story that played with the concept. A masked psychopath hacking apart teenagers at a campsite … clearly an evil character, right? By the end of the story, I wanted the reader to question to their original position on the motivations and morals of the killer, and through this, I saw the concept of evil becoming more flexible, like a lump of clay forming various shapes. Take something one considers evil, alter the perception just a little, and you have the possibility to create something entirely new, perhaps something good and noble.

Evil is relative and phenomenological. Look at the practice of eating dog meat in Yulin and Guangxi, wherein thousands of dogs are maltreated and killed (and my chosen words already divulge my position on the matter). For the western world, this is barbaric and inhumane. For the residents of Yulin, traditional, celebratory…and maybe delicious? I’ll never know. How about killing a man? Is this murderous or heroic? Does the man who pulled the trigger receive a life sentence or a medal? It’s via the lens we view such people and circumstances, the hermeneutics of interpreting the social and cultural interpretations that determines if we would point finger and say: EVIL.

As I was throwing around ideas for this article, it started to form a defence for my novel Entertaining Demons. As we progressed through the editing stage, I would suck in a quick breath regarding some of the aspects of the book. Were the evil acts being glorified? The aspects I explore as being evil, will readers share the same view or think I’m writing garbage? The more I turned these questions over in my head, the more I realised just how personal our interpretation of evil really is.

For example, the evil of television is featured heavily in the book, but I’m no soapbox preacher denouncing this box of sin! Like religion, or guns, or pit bulls, it’s not the object itself that is necessarily evil, but the hand that wields that. Television, as a medium, is fantastic: any access to a wider source of information for the masses is miraculous. Yet at the moment I see the networks parading an endless stream of reality shows, and I notice how TV angles its advertisement to such throw-away material. You’re not watching this? You’re missing out as this is THE show to watch. The most explosive season ever! (I heard my demon Audience speak as I wrote that.) It’s visual fast-food, an easily digested TV dinner forced down your gullet. To me it feels quite intrusive. In a past relationship, my partner watched television, for me, for an abnormal amount of time. Weekends were an endless stream of dancing competitions, singing competitions, soaps, then back to see who was knocked out of the dancing competition, then another singing competition, and if I was very unlucky … maybe some Big Brother. It felt like a third person was in the relationship.

So I anthropomorphised the television into a being that loves the attention, and having billions of homes, trillions of hours, all worshipping at the glowing HD altar, it began to grow too big for its boots. A new deity for the 21st century. This is the new breed in Entertaining Demons: the entities of modern evil as opposed to the devils preached from the medieval pulpit. Convenience, mass production, pornography, and more. I’m sure there’s a Facebook demon out there, performing wicked deeds just for the Likes. And let me tell you, the old demons are not too happy about the change in management …

Returning to my original post, are these thing evil? Is television evil? Not entirely, the good is there too, all tangled up. The shows eager to model compassionate behaviour to our children; the celebrities on screen not to be adored, but to enlighten, and more importantly, challenge; the moments, real or fiction, that remind us we’re human. Perhaps another book is in order called Entertaining Angels, where my demons are fought by a new breed of holy defender looking like a cross between Big Bird and Bill Nye? (I’d need a different title though. Have you seen how many books are called Entertaining Angels? I’d need something original. Angels and Demons? Sure, that’s not been used yet …)

Thinking back to the concept of evil being personal and relative, I wonder how Entertaining Demons would have shaped if I’d have been older or younger? Born on the other side of the world or been of a religious faith? Would I still perceive the evil in the world the same way? As it stands, I always saw Entertaining Demons as a tongue-in-cheek novel, a satirical horror. A few hours of gory fun, and hopefully my demons live up to their name.

But as often happens, the wicked happenings in the novel are nothing compared to real life tragedy. While I sit in my small quiet town in country Western Australia, my home city, and even now my home town, suffer in the terrible events of the past week. I wonder … if religious extremism was given a body, a face … what would it look like to me? What would it look like to you? A middle-eastern man heading to a pop concert with a homemade bomb? A white teenager walking into a church armed to the teeth? Evil. It’s all about perception.