Words from the Editor-in-Chief2 min read

If you haven’t done so, toss that old calendar into the recycle bin and pin your new 2019 Kittens Being Bratty edition to the wall. The ball has dropped in Times Square. Resolutions have been made (and already broken?). And the first issue of 2019 is ready for your consumption.

2018 isn’t the only thing that came to an end. In early December I made the difficult choice to retire the print edition. It was a year-long experiment, and after twelve months of heavy promotion, lots of love for the cover art, and praise for the fiction, we had 80 subscribers. While we appreciate each and every one of those 80 subscribers, it is obvious that the audience simply does not exist for a paper edition of Apex Magazine to exist long term. I want to thank the readers who subscribed and provided a large enough base of support to make the print magazine viable during its run.

We still have digital subscriptions available from ApexBookCompany.com, Weightless, Amazon, and via Patreon. And we have some exciting enhancements planned for our Patreon tiers that I’ll share next month.

“Bone Song” by Aja McCullough is another in a run of outstanding dark flash pieces we’ve published over the last couple of years. We have a translated piece by Romanian author Marian Coman titled “The Small White” (translation by Sebastian Simion) that dips its toes into eastern European magical realism. Finally, we have a strange generation ship story (“The Pulse of Memory”) involving goldfish and memories by newcomer Beth Dawkins. Beth’s story will certainly add color to the saying “memory like a goldfish.”

We’re delighted to have LH Moore back in our pages as the author of our reprinted story “With These Hands: An Account of Uncommon Labour.” Andrea Johnson interviews Beth Dawkins about “The Pulse of Memory.” Russ Dickerson talks with cover artist Tangmo Cecchini.

Cancer is an asshole. But Daniel M. Bensen survived his battle and succeeded in finishing and, ultimately, publishing his novel Junction. In his essay “Writing Wrongly” Daniel gives an intensely personal look into how he managed being a father, a writer, and cancer patient. His resilience is an inspiration to everyone. It’s one of the best “process” essays I’ve ever read.

See you in February! 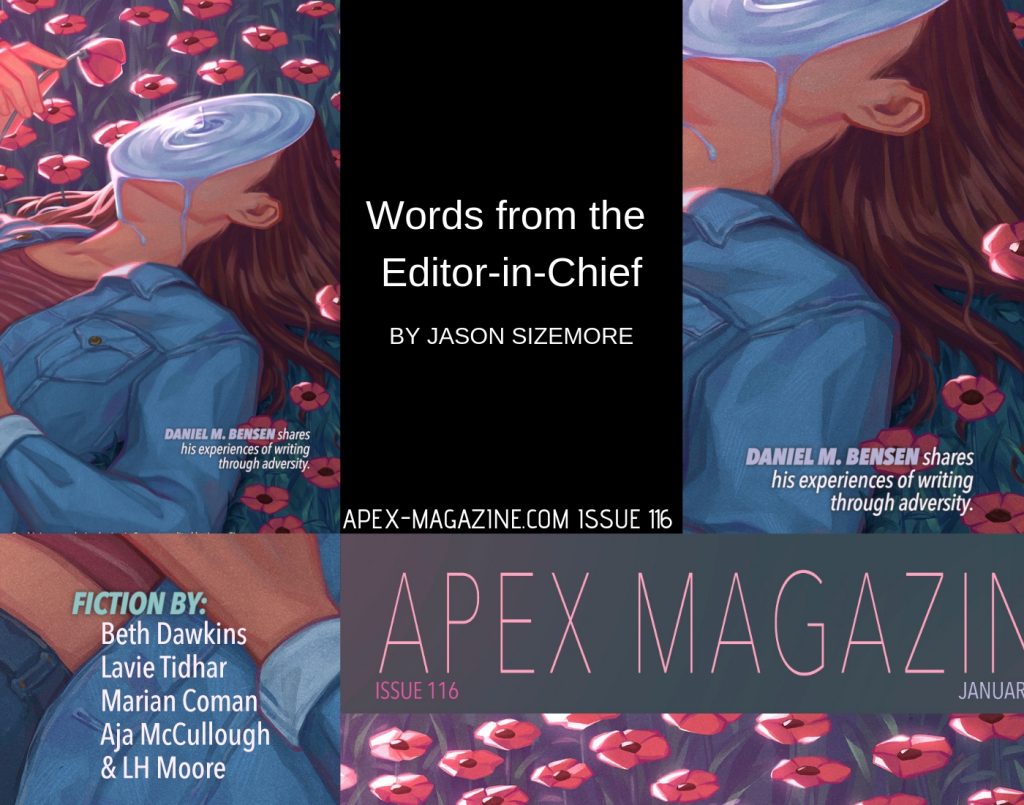