Words from the Editor-in-Chief3 min read

As a kid, I was big into reading. And I was a huge science fiction nerd.

Two of the shows that defined my youth were Reading Rainbow and Star Trek: The Next Generation. And they both share a common element: LeVar Burton. Keep this observation in mind as we take a trip down memory lane.

It’s the early ’80s. I’m a little guy with a big red afro. Tiny Jason would sit on the floor in front of the television and sing along happily to the theme song of Reading Rainbow, much to the annoyance of his family. Even though I’ve not seen the show in years, I can recall the lyrics and the pulsing synth beats.

LeVar Burton hosted the show and would narrate short books and stories to the viewers. His enthusiasm and friendly reading style appealed to my bookworm senses. I felt that he and I shared a common interest: books. Being an oddball child in a poverty stricken rural area made locating a reading friend difficult. When I had no other book buddies, I connected with LeVar Burton on Reading Rainbow.

Let’s go forward a few years to when I was an awkward adolescent (who still wore a fashionable big red afro). I loved all the corny early ’80s science fiction shows. I even enjoyed the reruns of classics like Lost in Space that ran on TBS on Sundays. But in the late ’80s when ST: TNG showed up, my lifelong nerd membership became cemented in stone. It was the one show I would not miss. I loved Data and Picard. Loved to hate Q. Had a crush on Troi. Thought Riker was cheesy and Worf a badass. And I admired Geordi (played, of course, by LeVar Burton). To me, Geordi was the true hero, saving the Enterprise with his miraculous engineering work time and again.

Mr. Burton now hosts a podcast called “LeVar Burton Reads.” An apt title as that’s exactly what he does. He reads what he considers some of the best modern genre short fiction being published. The fact that he has read three of our stories (“Welcome to Your Authentic Indian Experience™” by Rebecca Roanhorse, “Multo” by Samuel Marzioli, and “Jackalope Wives” by Ursula Vernon) in his current season of the show is nothing short of an incredible honor. He even offered a compliment stating how well-edited Apex Magazine is.

This is all very surreal to me. I’m still dealing with an internal fight with my emotions. Do I try to play it cool? Do I brag to all my nerdy friends? Do I constantly bring it up in my daily conversations with Lesley Conner (this one is a definite YES)?

To conclude, I encourage you to subscribe to “LeVar Burton Reads.” Naturally, first go listen to the four stories from Apex Magazine he has narrated (he also narrated John Chu’s issue 59 story, “Repairing the World,” in the first season of his podcast). Then work your way through all the other episodes.

The two original works I selected this month are by a couple of my favorite writers: Cassandra Khaw and Kristi DeMeester.

Cassandra Khaw’s story “Bargains by the Slant-light” begins with this evocative opening:

Like much of Khaw’s work, this story is visceral, heart wrenching, and poetic. It’s a “deal with the devil” that you won’t soon forget.

International fiction editor Cristina Jurado has selected a third original piece for the issue, “The Standard of Ur” by Iraqi author Hassan Abdulrazzak. At just over 7,300 words, it’s a piece that reads much shorter due to Abdulrazzak’s skill with setting and narrative. I look forward to seeing more work by this author, but in the meantime, enjoy this decidedly unique non-American offering.

Our reprint this month comes from Chesya Burke. “For Sale: Fantasy Coffins” is one of my favorite works by her.

Finally, this month sees the last installment of our pair of industry-based columns: “Between the Lines” and “Page Advice.” A big thank you to Laura Zats, Erik Hane, Brea Grant, and Mallory O’Meara for being a part of the Apex Magazine team over the past year! 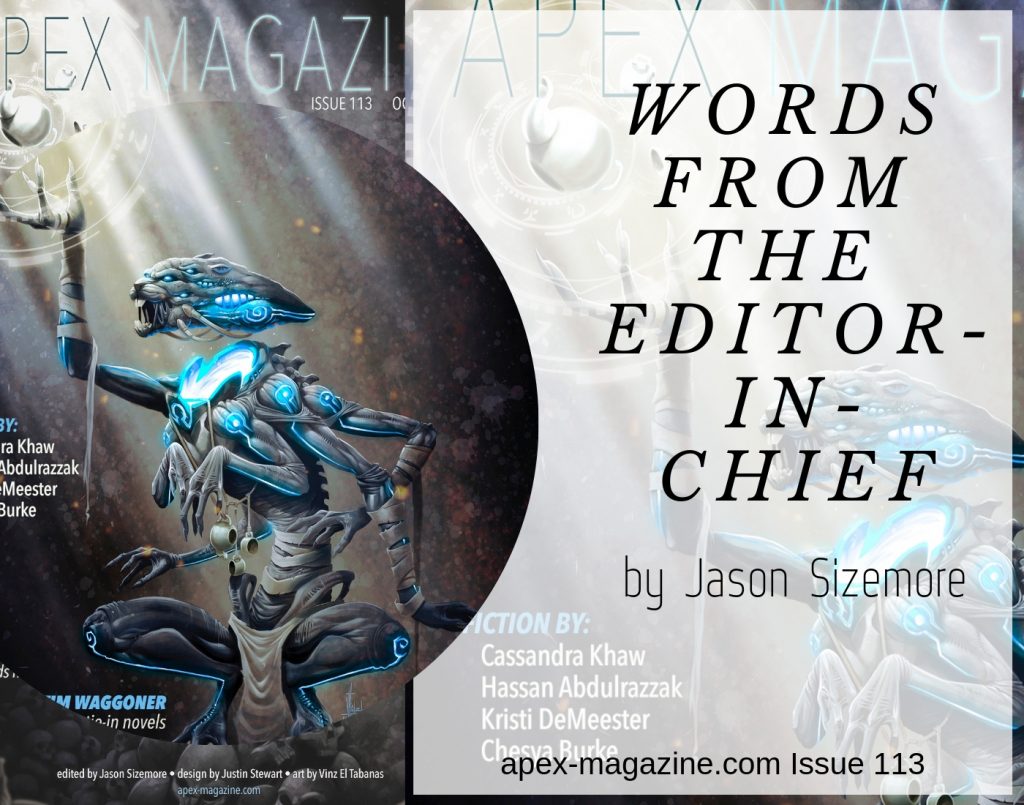