Words from the Editor-in-Chief2 min read

Now that we’ve entered the month of March, it is everyone’s favorite time of year: award season. Writers, publishers, and editors rush to social media and blogs to share their eligibility lists because we all love award recognition. Some people hate it, while others find it useful. I’m firmly in the useful camp.

It’s hard to know who is Campbell Award eligible or not. That new novel I read that I greatly enjoyed … oops, it’s from 2016, not 2017 … glad the author posted an eligibility list or I’d have wasted my Hugo vote. Fans who are cynical of the lists call them self-promotional and feel that those with larger platforms have a built-in advantage. Yes, and Yes. So, what?

Since when has self-promotion become a bad thing? Obnoxious and over-promotion is annoying and should not be done. But a blog post with the occasional social media reminder is sensible and informative. There’s an argument that authors with a large fan base have an unfair advantage. But I would put forward that social media provides an opportunity for lesser-known writers, editors, and publishers to be seen and considered by award voters because many voters seek out eligibility calls.

Apex Magazine has an eligibility post here. We’ve listed all original stories, along with genre and word count. Note that we published four novelettes, so if you decide to nominate them, be sure to list them in the proper category.

I’m eligible under the category of Best Editor (Short Form).

Thank you for your consideration.

This month we bring you nearly twenty thousand words of fiction. In Rachel Harrison’s “Irregularity,” we’re transported to an isolated observatory satellite meant as an early warning system for a potential alien aggression. It’s a classic tale of space madness caused by isolation and too much staring into the abyss of the universe. A favorite of our readers, Cassandra Khaw, returns with “A Priest of Vast and Distant Place.” It’s light and sweet work of magical realism, and quite a different tone than much of her work that I’ve read. Bentley Reese’s “We Are New(s)” is a flashy cyberpunk tale with a noir feel around its edges.

“Between the Lines” is back, and this time Laura Zats and Erik Hane dissect the “writing dream.” Brea Grant and Mallory O’Meara offer “Page Advice” for a reader seeking quality gateways to horror fiction.

The world is excited for the Black Panther movie directed by Ryan Coogler and starring Chadwick Boseman. It looks fantastic. ZZ Claybourne shares a bit of what the film means to him—a black man, to see a black superhero movie directed by a black director headlined by a black actor—in his essay “Persistence of Vision.” Finally, Paul Jessup writes a beautiful and moving sendoff to the late Ursula Le Guin in his “A Wave on the Sea.”

“It is good to have an end to journey toward; but it is the journey that matters, in the end.” 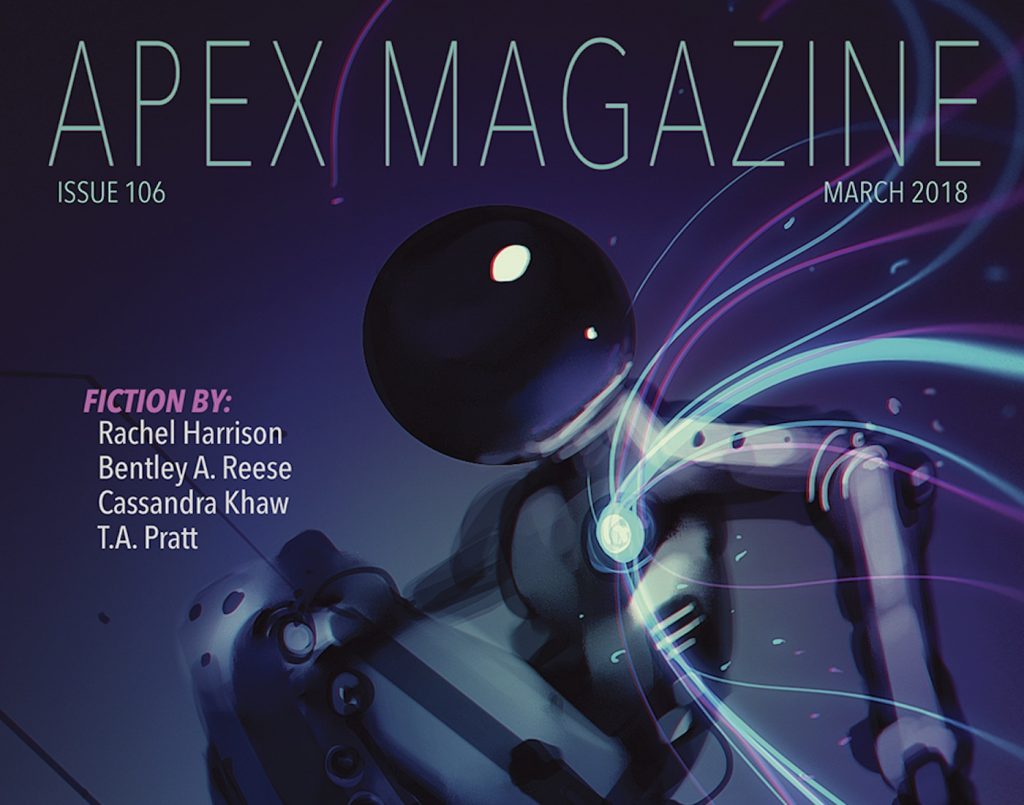