Cultural astronomer Jarita C. Holbrook studies the sky lore of indigenous African nations, whose mythology and spiritual cosmology reflect their stories, values, and culture. Her research takes her throughout the continent and her dedicated readers have journeyed right along with her. When I discovered her research, it reminded me that while I had been educated in a very Western system, the world is round, as poet Nikky Finney says. After all, the Dogon of West Africa observed and named Sirius B the Dog Star long before the French arrived with their telescopes. Their masked ritual dance tracked its movements across the sky, and their ancient knowledge is still a mystery. While traveling in India, the everyday talk of ancient, auspicious occasions made me think of the signs and symbols of my own family’s Mississippi Delta hoodoo. Separated by an ocean but sharing the same sun, I was told some Indian families didn’t move without consulting an astrologer, but I had kinfolk who wouldn’t make a significant move without a reading.

Millennia ago, unknown cultures of Babylon, Syria, Persia, and Central Asia mapped out the stars we have come to think of as the zodiac. Later, Greeks borrowed some constellations and named their own, creating the Western zodiac system of twelve signs we think of today. And yet, the stars fill all our skies, peer at us from the deepest nights. From the meticulous, complex Mayan calendar to the wondrous wheel that is the Chinese Zodiac, cultures around the world have gazed upon the unknowable and tried to chart a path that will lead them on to surer ground, toward a more livable, comprehensible future.

I have long had a love-hate relationship with astrology. Fascinated by its philosophical assurances, drawn by its poetic potential, and curious about its mathematical intricacies, I once worked for a French publisher of thirteen delightful and distinctive astrologers. No two were alike, not in temperament, voice, or technique. Their detailed star and natal charts and highly guarded algorithms were a source of wonder to me. I can admit that I am intrigued by this arcana, transfixed by the possibility of having an inside on Fate. Yet I am enthralled, all while railing against the parts in my charts that don’t seem to fit with my own life’s logic or lived reality. “What is your moon?” I am asked. “When and where, exactly, were you born?” All of these questions presume there is far more to my story than the stars have told, far more than even stars. The promise is that with just some key information, an atlas and ephemeris and other astrological calculators and tools, the key to who I am and what I could be can be known.

When my world feels less knowable, and my path takes me along journeys I cannot foresee, I find myself reaching out more to the realm of the stars. More novice than star-gazing supernova, I check the charts in passing and search the lines of my favorite astrologers, from the poetic, inspiring horoscopes of Chani Nicholas, the wild, unpredictable zaniness that is Rob Brezsny, to the uber cool and trendy, oftentimes hilarious humor of the Astro Poets (@poetastrologers), a duo that clearly has some unresolved issues with Libra. When Jason reached out to ask if I might be interested in guest editing a special edition of Apex Magazine, I was thrilled, and the wheel turned. I knew right away what the topic would be. As an editor, I try to help identify works that I would also love to read, and a whole book of Zodiac speculative fiction is something I would definitely spend some time exploring. If you think that would be cool, read these great stories and get thee to the comments and appeal to our dear editor Jason. Get on it, people!

A little on the tales gathered here, hopefully without any spoilers. When I placed the call for Zodiac-themed stories, I wasn’t surprised to be inundated with Water signs. After all, water is one of the most enduring elements on our planet and its symbolism has captured the imagination of artists throughout time. Jordan Kurella’s “Jewel of the Vashwa” is a lyrical, original exploration of loyalty and sisterhood in a world that is clearly the realm of Scorpio. Celia Neri’s moving Pisces story, “The Barnum Effect,” is a contemporary reminder of why we should be brave and bold and trust our instincts—and take heed of those newspaper horoscopes, no matter how obscure.

But what do you do when you are dissatisfied with the stars under which you are born? One possibility is to create your own constellation. Eden Royce does so in the wonderfully rich story, “For Southern Girls When the Zodiac Ain’t Near Enough,” whose title is a nod at Ntozake Shange’s pioneering classic and the popular Zodiac spread when pulling tarot. You can learn more about Eden and her work in a great interview by Apex contributor, Andrea Johnson.

Stefanie Elrick’s“Prism” offers a harrowing journey of self-discovery and healing for Gemini, but the stars are not all doom and gloom. Some forecasts make us want to holler and others leave us “Gasping,” laughing aloud at those who would try to control another’s fate. Brandon O’Brien’s story is one of those tales whose wit and sly humor kept me guessing what might happen next to an island family both familiar and strange.

Astrologers often discuss the planets that rule us. Poet Mary Soon Lee offers three takes on Mercury, Neptune, and former-planet, Pluto, while poet Ashely Adamsshares “A Theorized Form of Matter.” Tara Betts, a professor and a poet, uncovers layers of an Earth sign in “Capricorn,” and poet Sherese Francis reminds us in “Celestial Mary (Galileo’s Daughter)” of women’s seemingly timeless battle for agency, the right to name and claim our own stars—and the stories by which we remember them.

If you have been following emerging voices in speculative fiction, then you know that Kiini Ibura Salaam (Ancient, Ancient and When the World Wounds) has long been a writer to watch, known for her fertile imagination and sensual, visceral prose. I have admired her work since I found it in the pages of Fertile Ground, a Louisiana-based literary journal and later published her in Dark Matter: Reading the Bones and Dark Matter: A Century of Speculative Fiction. She creates stories that are as wildly diverse as they are beautifully rendered, but she is also a fine non-fiction writer. When I read author J. M. Guzman’s fantastically weird Libra tale, “La Ciguapa, For the Reeds, For Herself,” I knew that Kiini’s essay on her visit to the Dominican Republic would offer additional insight on the powerful themes Guzman’s story evokes. Part folkloric retelling, part science fictional horror, this is one of the tales that lingered with me.

This month’s special cover features original art by Stacey Robinson. To learn more about his work and his vision, check out Russell Dickerson’s recent interview of him. When I asked Stacey to create something for this issue, I wanted something a little Sun Ra-ish, art that would convey the mystery, pageantry, and cosmic power of the collective Zodiac signs. Stacey has an eye for capturing the impossible, and I think with this cover, he created a cool work full of celestial energy, and one that makes you stop and think about what you’re seeing. For me, his art, these new stories, and poems remind me that no matter what patch of earth we stand upon, we all share the same sky. We are all here together, a witness to these times, trying to make sense of the present, trying to map a way to the future. And whether it is through science or faith or a combination of both, under ancient stars, new dreams are born.

Hope you enjoy our special Zodiac issue and may all the stars align in your favor! 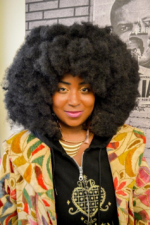 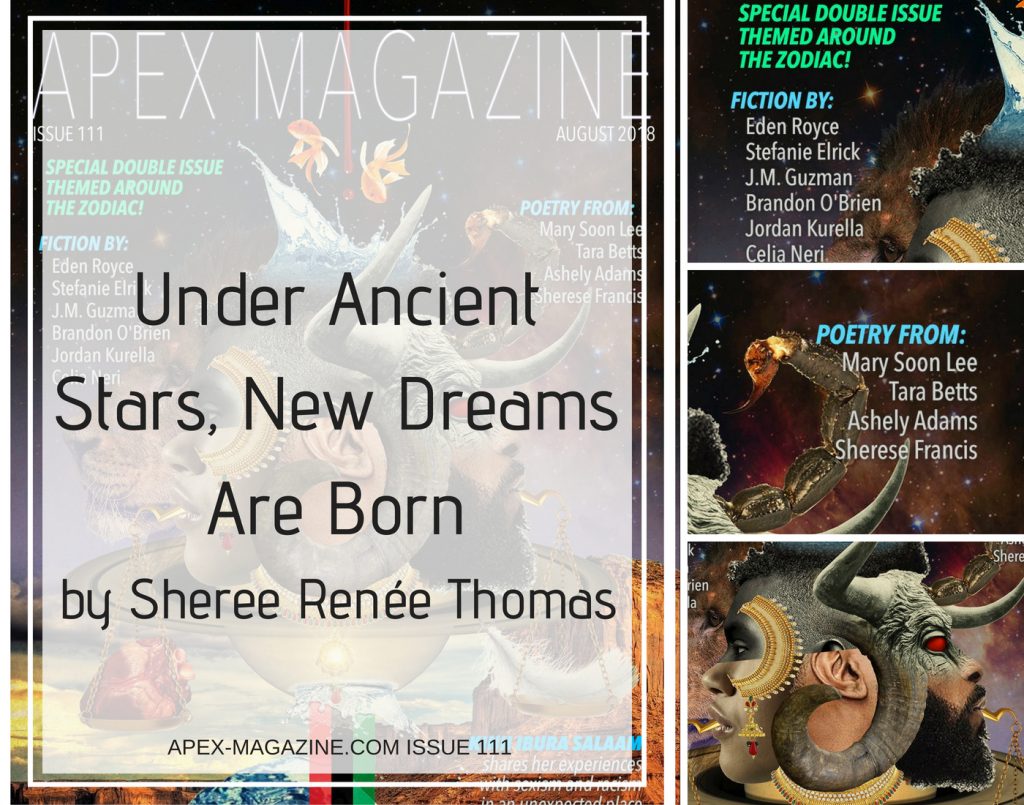