Robert Borski did not start writing poetry until he was well into his sixth decade, but is now pursuing the craft with a vengeance. Online, his poetry most often appears in Strange Horizons; in print, in Star*Line. He has been nominated for the Rhysling Award thrice and continues to live in Stevens Point, Wisconsin.

Ghost flesh sears easily, like the skin of xeroderms.
This is why so few hauntings take place at noon.
The sun is a scourge. Photons burn like acid.
But when, as will happen up to four times a year,
a new moon (itself as well a ward of the sun)
swings into place and is positioned just right,
a liberating pall of darkness descends
upon the earth, creating a night as artificial
as the coverlet that douses a parrot’s cage.
Ghosts may walk at noon then. You can see them
shambling about if you angle your lenses of smoked
glass right. Quite a few look like boorish tourists,
wearing loud shirts, deriding local customs, afraid
to drink the water. But just as many others are watching
for those who have deliberately sought them
out: people like me, who, despite the prevalence
of tidal night, have never quite been lucky enough
to be haunted outside realm of dreams
or memories.
For years now I’ve been following the ephemeris tables,
chronicling the stately pavan of sun and moon, waiting
for the opportune eclipse. The geographic locus
for best observation has not always been ideal. Nevertheless,
when accessible, I’ve tried to arrange my disposition
and schedule so I could be there. Hence Africa today –
the once and future dark continent. Overhead,
as the sun begins to diminish, the air grows chill.
While I strain to view better in the murk, forms
are already condensing, like statues in a river
of black milk.
Then I spot her. And am stunned in heart and mind,
paralyzed to the core.
All the things I’ve wanted to say, the love, the regrets,
the apologies, the simple ordinary poetry of talking
to the most important person in my cosmos, each stalls
in my brain, I’m so happy to see her, to take my phantom
wife once again into my arms. Whence the poltice
of tears, as uneclipsed,
like some lunar pendant itself, my heart
lifts out of shadow,
our lips joining umbrally.
If only, if only, if only. Please, God, whatever
aspect of you governs
the clockwork universe, delay the planets
in their course
for just a few seconds more, and I will never
rebuke you again.
But then as the dark rim of the sun begins to brighten,
a rooster shakes its feathers nearby, crowing. Too early,
fresh kisses fade like smoke. Too soon, burning
like a flare, and somewhat
of a surprise,

the wrong one of us begin to dematerialize. 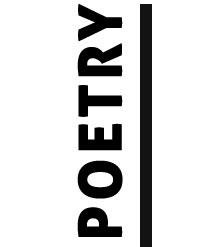