The Importance of Presenting Disabilities in Literature 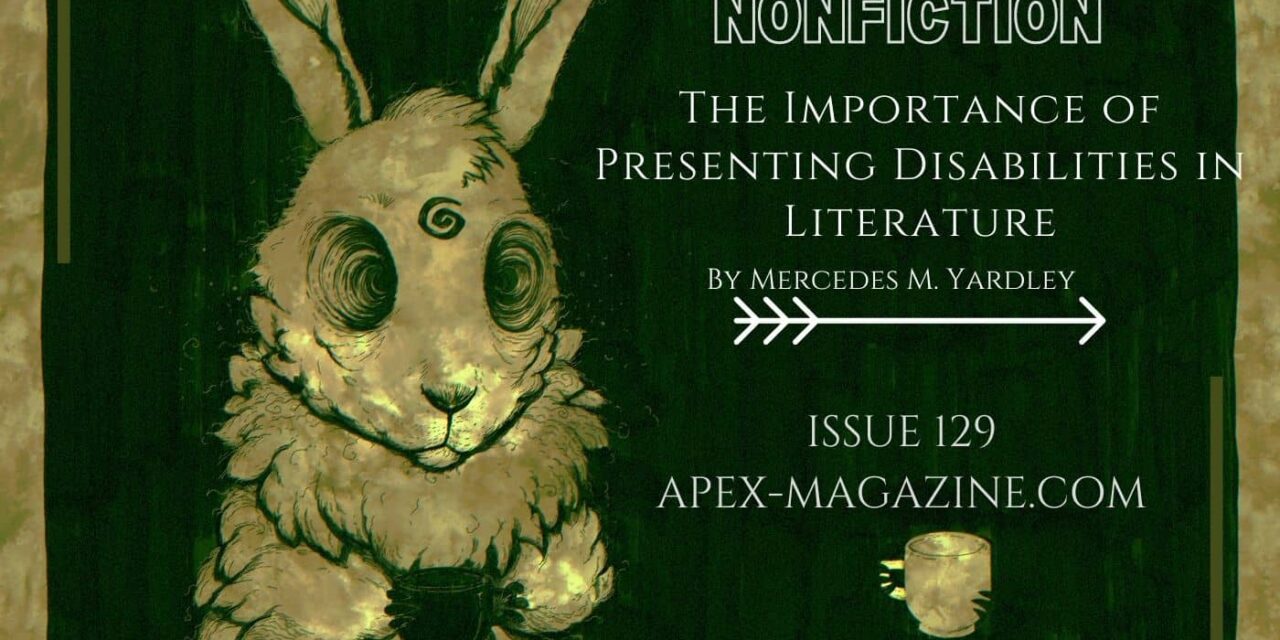 Discussing disabilities in literature is a tricky thing. There’s so much emotion attached, and rightfully so. When I’m reading a book and come across a character with a disability, my mind starts to spin. How is the character being portrayed? Is it a positive portrayal? Is it accurate? Is the character there to be the butt of every joke? What is the author’s purpose for having a disabled character in the first place?

There’s a risk even discussing the subject. When I pitched this idea to the editor at Apex, we discussed the delicacy and importance of the article. Did I have any authority to write about it? Would it be stepping on somebody else’s toes or telling someone else’s story? It is so vitally important to be respectful and accurate when you’re dealing with people’s lives and experiences, especially for a marginalized group that so often has their voices silenced.

My son has Williams Syndrome and autism, and this has opened my eyes to the need for inclusive characters in literature and other media. Once upon a time, these characters were included almost solely to have somebody to laugh at. Or the character was an autistic savant with the uncanny ability to figure out numbers/solve crimes/show off his photographic memory. While there are, of course, autistic savants, they are few and far between. They don’t accurately represent most people with autism.

Characters with special needs of any kind are quite often written for tragedy. Who can forget the soul-crushing ending of “Of Mice and Men?” Lenny isn’t rewarded for his strength and innocence. He’s a liability. In “Flowers for Algernon” we see firsthand how Charlie Gordon is given more value and esteem when he’s at his highest mental point. As his intellect gradually decreases, he is once again a tragic character who is considered “less-than” and pitied.

Another debatable character is Stephen King’s iconic Tom Cullen, whose simple M-O-O-N refrain eventually becomes crystal clear near the end of the book. It slides into the plot like a key into a lock, and his childlike quality is used as a literal protection for him. Some readers feel this is again leaning into the savant aspect of a disability in that the character must do something with the disability in order to redeem himself. It isn’t enough for him to simply be who he is, but he must perform some amazing trick as to his disability in order to be considered worthwhile. He is required to earn the respect that other characters are simply given.

I took part in an amazing roundtable on Dead Headspace regarding being an author with a child who has a disability. Patrick McDonough hosted while Brennan LaFaro, Cynthia Pelayo, Tyler Jones, Rhonda Garcia, and I discussed how it is to have a child who is fundamentally different. Several children made an appearance during the recording, including my adult, 18-year-old son who bounced on the bed behind me and asked if Cynthia and Tyler could come over to play. Cynthia had something to say regarding disabilities in literature. She has two children with autism, and she revealed an insight that struck right to my soul. “My oldest son,” she said, “didn’t see kids like him in books. Everything is about autism or accepting autism, but he’s like, ‘I want to see a character that’s like me.’”

A person. Not a glorified mannequin meant to give the author sensitivity points.

And that’s it. That’s the core of the situation: a majority of authors don’t have a disability and don’t write books from the viewpoint of a person with a disability. There are books you can study concerning the disability itself, but how many books have a real, fleshed-out character living their life with their particular abilities? You can often find some generic child in a wheelchair who is usually called Wheelz, and Wheelz is scrappy and happy and two-dimensional. While admirable that a child in a wheelchair is represented, Wheelz generally has a positive can-do attitude and cheers his friends on. We don’t see Wheelz having his own adventure as much as he tags along with the group. We don’t see him struggling to get into the choir room at school because it isn’t as wheelchair accessible as it needs to be. We don’t see him sitting at home checking over his medications to make sure he has everything he needs. Wheelz’s job is to be happy, not complain, and show that sheer gumption can overcome anything.

So how do we open our hearts and minds? How do we diversify our reading? I suggest we read books by people in the community. Naoki Higashida’s books The Reason I Jump and Fall Down 7 Times Get Up 8 are wonderful places to start. Higashida was only thirteen when he wrote The Reason I Jump. He was a nonverbal boy with autism. His short essays on how he thinks and what he perceives are simply glorious and eye-opening. Sarah Chorn’s Seraphina’s Lament is dark and beautiful and gorgeous.  Sarah, who has Ehlers-Danlos Syndrome and lives with chronic pain, writes with wisdom and compassion. The anthologies Defying Doomsday and its follow-up, Rebuilding Tomorrow put out by Twelfth Planet Press, focus on realistic protagonists and also fall into the “own voices” category.

Read widely. Write truthfully. If you want to introduce a character with a disability, ask yourself why you’re doing it. Are you trying to score diversity points? Then this might be a character best handled by someone else. Do you have a story to tell, do you want to show the dignity and the travails a disability can represent? Does it add to the story and do you have something to say? Is it something you feel so strongly about that you’re willing to wade into a potential minefield? This subject is important. Conversations need to be had, and readers will have something to say. During the roundtable podcast panel mentioned previously, each parent and writer there spoke about the fear of getting something wrong and offending somebody in the disabled community. Think of that: we spend our days deeply enmeshed in the world of physical therapy, doctors, speech, suction, feeding tubes, paperwork, protecting our children against abusive neighbors, teachers, and the ugliness of a society who feels anyone outside of a “norm” has to somehow earn love …and we wonder if we’re qualified to write about it?

I’m glad we wonder. It’s a question we need to ask.

It’s a question to be respected.

Sometimes the best way to answer it is to listen to those most closely affected, because it’s not the discussion that’s tricky, it’s what we do with the answers.

They’re delicate conversations, yes, but they’re important ones to have. Be brave. Read and write widely, voraciously, and with respect. Recognize that a story is not always yours to tell. Matter of fact, rejoice in that because it means someone with a different way of thinking, moving, living, being than you might tell it with more depth than you. You’ll find that you’ll learn from an uncontrived source about what it is to be utterly human.

My son is one of the most wondrous humans I know. He sees the magic of the universe in the mundane. He lies down on the floor, puts my hand on his heart, and shows me how to watch the ceiling fan spin. The right song makes him weep. He is a person utterly incapable of lying or guile in any form. Because of him, our household avoids the exhaustive dance of masking our emotions. Are you sad? Be sad. Are you joyful? Be joyful. There is no shame in feeling how you feel. Those strange societal mores don’t apply here. He is wonderful and valid and deserves to see his own adventures in writing. And, as a friend told me, he’d make one hell of a star voyager. 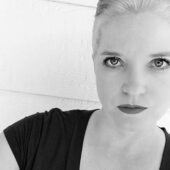 Mercedes M. Yardley is a dark fantasist who wears poisonous flowers in her hair. She is the author of Beautiful Sorrows, Apocalyptic Montessa, Pretty Little Dead Girls, Nameless, and Love Is a Crematorium. She won the Bram Stoker Award for Little Dead Red and was nominated for her short story “Loving You Darkly” and her Arterial Bloom anthology. You can find her at mercedesmyardley.com.