Home » Current Issue » A Monster in the Shape of a Boy

A Monster in the Shape of a Boy 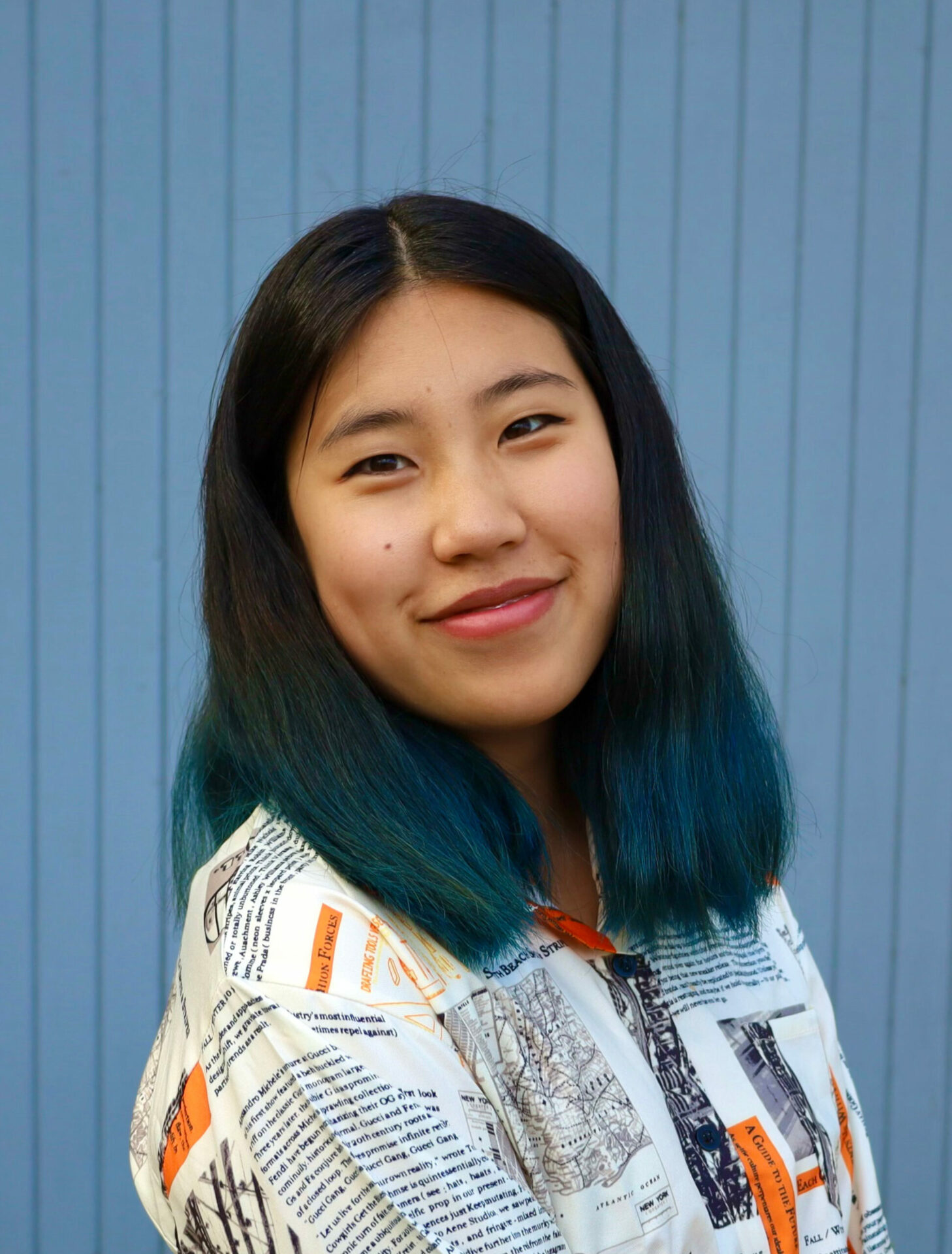 Hannah Yang is a speculative fiction writer. Her stories have appeared or are forthcoming in The Dark Magazine, Fantasy Magazine, Nightmare Magazine, and other marvelous places. She has a BA from Yale University and lives in Colorado. Follow her work at hannahyang.com or on Twitter at @hannahxyang.

When Peng opens the door, he finds himself face to face with a boy who looks exactly like himself.

The other Peng stands in the doorway, as though surprised to have been caught. Two eyes peering out from the dark. Fluffy black hair, messy enough to stand up in every direction. Ruddy cheeks and scraped elbows.

Even their clothing is identical. His straw slippers, his grey tunic, his twice-mended trousers with a hole in the left knee. The only difference between them is the dried blood on the other Peng’s hands, as though it has already eaten a child for its breakfast. And the delirious gleam in its eyes, as though it’s still hungry for more.

Peng is twelve now, old enough to deal with a yaoguai on his own. But now he stands frozen, like a little boy. Fear squeezes its cold fingers around his neck and pins him in place.

He should kill the monster, the way Baba taught him. Kill it now, before it gets a chance to come inside. No mercy. No hesitation.

He doesn’t have his spear with him, but Baba has taught him that anything can be a weapon if you really need it to be, and there are plenty of options inside their hut. The heavy wok hanging from the wall, the wooden stool with its sturdy legs.

Still Peng doesn’t move. Can’t move. A whimper scratches its way out of his throat.

And so it is Baba who comes up behind the other Peng and runs his spear through its stomach. It is Baba who watches as its life fades away. And all the while, Peng stands there paralyzed, feeling as though something inside of him has been scooped out and scraped clean.

Practically every village within a hundred li has hired Baba to deal with some yaoguai or another.

There are many kinds of monsters in the valley. The one that came to the hut today was the type that scares Peng the most, the ones that can borrow the shapes and mannerisms of real people. If Baba hadn’t gotten home in time, that creature might have inserted itself into Peng’s life and not even Baba would have known the difference.

All through the evening, Peng can’t stop shivering. The memory of his cowardice lingers in the hut like a foul smell. While Baba cleans and sharpens his spear, Peng sits quietly on his cot, holding his pet rabbit Xiao Bai close to his chest. Strokes her soft fur, her twitchy pink nose.

He tries to keep his expression stoic even as he does this, but it breaks whenever Baba looks at him. Something between them is strained now, stretched thin.

“What happened to you back there?” says Baba. “I didn’t raise my son to be a coward.”

“I was going to fight back if it came any closer. Really I was.”

“You know what’s even worse than a coward? A liar.”

Baba says nothing more, just keeps scrubbing the yaoguai’s blood out of the wood beneath the spear tip, the water in the basin frothing pink.

“How can you know for sure? Aren’t some of them supposed to be immortal or something?”

“There are ways to banish a monster for good. My father taught them to me, and I’ll teach them to you.”

They build a bonfire that night, a light breeze blowing from the mountains, a full moon hanging in the sky. All the men of the village come to watch the monster burn, unearned pride on their faces, as though they were the ones who wielded the spear. They look at the body and mutter to themselves in apprehension. Some spit on it, hit it with stones.

In the stories, sometimes the yaoguai can shift to their original form at the last moment. But this one doesn’t. It’s already dead by the time they put it on the pyre. Peng watches its battered body burn, its face identical to his own, its fingers stretching toward empty air.

In the following days, Baba increases the rigor of Peng’s training. Peng is glad for the distraction. It keeps the nightmares at bay, the relentless visions of a monster wearing his face. In the daytime he is brave, grows quicker and stronger, but at night he has trouble falling asleep. He begs Baba over and over to keep their small lantern burning.

Baba never leaves the lantern burning. Instead, he teaches Peng how to stand his ground in a fight. How to wield his spear, the commoner’s weapon that their family is famous for. How to use all the techniques that Baba’s own father once taught him.

One day, Baba tells him it’s time to practice on Xiao Bai.

They stand outside together, in the middle of the dirt footpath that leads from their hut to the rest of the village. Xiao Bai sits, chomping on her last cabbage leaf, watching Peng and Baba with mild curiosity. Her nose twitches. Once. Twice.

“We don’t need to kill her. I’ll practice harder, I promise.”

“Monsters come in all forms, son. Most of them look innocent. They’ll play mind games on you if you let them. A monster slayer must be able to do what others find unthinkable.”

“I had a dog once,” Baba says quietly.

Peng sets his jaw and does as Baba asks. A single thrust of the spear is enough.

When he’s done, Baba asks him to run through the entire set of exercises he’s learned over the past few days. Peng lets his muscles take over, grateful for the chance to let his mind slip back into unthinking calm.

He performs to near perfection. But Baba does not clap him on the back, does not offer any words of praise. He only tilts his head to the side, as if considering something.

“Rumor has it there’s a new yaoguai in Jiangfei,” he says. “One of the nasty kind that takes the shape of a beautiful woman and lures men into its arms before it eats them.”

Peng stays silent. A puddle of red has grown beneath Xiao Bai’s carcass, seeping into the dirt.

Baba keeps speaking. “There’ll be a high price on its head, I bet, for the hunter who gets there first.”

A question disguised as a passing remark. Peng knows what Baba wants him to say, but he’s afraid his voice will tremble or crack if he opens his mouth.

“We’ll go tomorrow, then,” says Baba finally, deciding the matter on his own.

True to Baba’s word, the yaoguai in Jiangfei is beautiful. Long hair as dark and smooth as spilled ink. Small feet that walk in dainty steps.

They find her alone by the riverbank, hanging up laundry to dry. When she sees the hunters approaching, she utters a cry of alarm and begins to run away, just as a real woman would. She only makes it a few paces before she trips over a tree root and falls.

Peng walks up to her. Wet clothes flutter from the tree branches around them, long skirts and wide-sleeved tunics in faded blues and greys.

“Please,” the false woman whispers. “I have children at home.”

Her voice is rawer than Peng had expected, almost hoarse. It reminds him a bit of his mother’s voice. The memory is sharp and sweet, like biting into an unripe persimmon.

Peng pushes the memories aside and makes his voice loud and strong, the way Baba would. “That’s enough, monster. You aren’t fooling anyone with your lies.”

That’s what all the monsters say. Everyone knows that.

Peng glances at Baba. Baba does not move. His eyes are fixed on Peng, rather than on the woman. Checking to see if his son is finally the size and shape of a real monster slayer’s son.

So this time it is Peng who stabs the spear through the yaoguai’s chest. It is Peng who watches as her life drains away.

This yaoguai is harder to kill than a rabbit. He has to stab her once, twice, three times before she falls still. Blood spatters over his shirt, his hands. He feels as though there are two of him. One wielding the spear, strong and ruthless. The other watching on in confusion, begging him to stop.

She doesn’t fight back. Near the end, she makes a soft gurgling noise, but Peng can’t hear what she says, can’t even tell if she’s trying to speak at all.

Afterward, Baba counts out the coins they receive from the Jiangfei elders and gives half of them to Peng.

All the way home, Peng wears his pride like a new coat. He has never had money of his own before. He wonders if this is how Baba feels every time he finishes a job, this confidence that he has earned his rightful place in the world.

When they reach their village, Baba claps him on the shoulder. “You go on home, son. I want to tell the other villagers what you’ve accomplished. We’ll be feasting in your honor tonight.”

Peng walks back to the hut alone. He looks for the spot on the path where Xiao Bai died, but he’s relieved when he can’t find it. Baba must have taken her carcass away after their training session. Even her blood has faded so that it looks no different from the mud around it.

After their long journey, the hut looks small and safe. He reaches to unlatch the front door.

Peng finds himself, for the second time, face to face with a boy who looks exactly like himself. He walks forward, undaunted. One step, two. And realization hits him like a sharpened spear, bright and fast and burning.

© Hannah Yang
← You in Your Headmeats Interview with Author Hannah Yang →