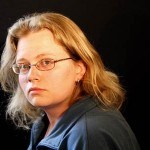 Seanan McGuire, sometimes also known as “Mira Grant,” is the author of more than a dozen urban fantasy and science fiction novels, including the newly released Sparrow Hill Road. She lives in Northern California, in a town with more than a few ghost stories of its own, where she endeavors not to be eaten by her three inordinately large cats. When not at home writing, she is either at a convention or at a Disney Park. She can be found at www.seananmcguire.com, on Twitter as @seananmcguire, or on Tumblr as seananmcguire.tumblr.com.

“Earl,” I said, “what the hell am I supposed to do
With a clockwork chicken?
The springs aren’t wound quite right; it crows
Eight times a night, and twice at dawn.
What’s worse, it can’t decide whether it’s a rooster
Or a hen—how do you cook a clockwork egg?
Do I need to be concerned that robotic foxes
Might be plotting to come carry it away?”
But Earl just smiled and said “I love you,”
And I guess that was that.

I never should have married a mad genius.
My mama told me not to, but I was stubborn
And I thought he was cute, with his lab coats
And his uncombed hair,
And the way he raised my father from the dead
To come and dance with me on our wedding day.
It seemed romantic at first, I guess.
Girls like me are bound to have a few
Little lapses in judgment when we’re seventeen.

“Earl,” I said, “you know I don’t mind zombies.
They’re part of your work and I respect that.
But please understand that the walking dead
Do not improve a Tupperware party
As much as you seem to think they will.
Ms. Fairborne was very upset about her dog.
And if you offer to resurrect it, I swear,
You’re sleeping on the couch until next Tuesday.”
But Earl just smiled and said “I love you,”
And I guess that was that.

Now my doctor says I’m gonna be a mother.
I guess I have a lifetime of reanimated hamsters and
Science fair volcanoes that really pump out molten magma
To look forward to.
But I’ll never be bored, and I’ll always know Earl loves me,
And when you get right down to it,
Maybe clockwork chickens aren’t so bad.

“Hey, Earl? Wanna come and show me how to wind my chicken?”