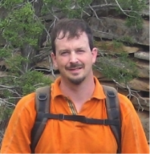 Matthew Chamberlin lives with his family in Virginia, where he also writes. His poetry has appeared in Mirror Dance and Star*line, and is forthcoming in Jersey Devil Press. A story is forthcoming in Strangelet. When not writing he devises ninja training sessions for his sons Alex and Nicholas and watches the suet feeder in his backyard, which goes untouched.

Chimney witches dwell in chimneys,
says the one who dwells in ours.

We’ve cousins dwell in wells, she says, they’ve
moons for eyes and sing below,
sing low and sweet in undertones while others drum
with hands above and strong or soft ring golden bells,
they ring and ring the wells to lightness.

Still others hew to mossy trenches, thronging
down the breathing stairs to congregate in
deeper halls where from the benches by the
walls they sibilate smooth songs of flesh.

There ogresses immense in chairs
of riverrock go tilting to and vastly fro,
great yawning arcs that crush the bone
and birthing as they do fast tawny tidal cats
who spring upon the tabletops
and sing along with mirthless prowls
and thrash their orange howling tails.

The rocking crones from month to year
Depart their chairs and disappear–they set their teeth
in mud-eel tails and eel-borne by lesser trails
convolve with sirens great and small,
avoiding thoroughfares and wells
to surface under urban malls
where ells descend the borough rails.

They troll the subway catacombs
for skells who keep a hidden spark
and nose with molish lambency in thrall
to darkness—puffs of starry brightness
light their way and in bright puffs
of steam they find them, touch peduncles
to their skulls and suck the dreamstuffs—

The skells in hunching loss go somehow on.
They thrill to feel the trains rush by,
meld clay with waterhands and mold
an eye to fill their sparkless wells.
The things they knew! The gush of love,
the gasping walls and musk of tongues,
the rasp of heels through the halls.

Until they hear the bells—
She whispers lowly to me, do you?
Bells below, the barrows’ knells
so slowly rung for sorrows dead and young again,
reborn in shallow palimpsests or strung
from gibbets on the fells—

I promise lass I’ll wend the feathered hides
in tufted tatter-cloaks embossed in
arabesque and blessed with spells and gloss of
varmint gristle, tempest-tossed—
Such a pealing laugh she has. I whistle
and she comes–pretends a kindly put-out,
gentle elder—kin annoyance, grumbles,
putters, always comes. But not too close.

I sit upon the braided rug, a circle deftly stitched
around the fringe in red and gold and watch
the hearth by eyelight—there visions stir
in moiling ash. Slow whorls revolve, lay bare
a hilltop palisade encircling an inner glade
wherein the morlock crowd abides, agimble
round the loathly hag who ringing loud and nimbly
springing hurls high her gnawbone and subsides.

My old man glares befuddlement, raw thumbs
hitch belt-loops, kicks the hearthstone. Frowns an
earnest farmer’s frown of earthy laws and horses foaling,
mewling shoats and early thaws. Won’t draw’s
what he says, but I know well who’s damped the flue,
her twitchy buttocks squashed athwart
the narrow channel brick to brick
and thatch to stick to stop the flow.

I sigh—who’ve seen him worry with his penknife,
pearly inlay test the mortared courses
place the bundles wrapped in cloths and
press the gifties in amongst–then touches tongue
to suppurating stone and sips the milk that
wells there, silky dabble-drips that bead,
the rolling eyes of mudstuck deer—

He’s got his own desires, naught to do with fires
of flame that warm a room. Tilts fallow hips
to give off yellow smells, cuts loose a gassy
bog-belch. Jesus, I let slip and catch a slap.
Nor take his name, tones Paw in cobble-voice.

Reverberating reverence I fall through hollow moons
and rising fulsome with the wolves give voice
to marrow cries. Then with manxsome eyes I stalk
the lakeshore loons, slink toothsome to the loons
whose tremolos descend in clotted ash upon the shallows.

As if I hadn’t seen the skins, the bags from up
the riverbank he drags. Nor watched the lowing cattle
sink, nor dreamt the ram—the lathering and plunging ram—
nor seen the children gathering along the fringe,
the wise and sagging sparkle-youths whose needled eyes
sew pinecone mouths.

She queries after Sunday leavings, quivers puddings.
We’ve a lively repartee, but I know better.
Natch, says I from safety of the circle-rug—
she chuckles, knows me well as I know her.
Oh girly, sighs she, rustles in her cave, the ashy dislodge
settles on the firedog, red eyes in smoke—
once I watched her pluck a fork from out
her silver snail-shell ear, tuck to and dine
on bullfrog trotters, suck the kicking bones.

Pa took love home twice from church then thrice with
damsels spliced and blooming, rosebud lips and
hair so coffee-strong he horsestampsnort
returned with blackest countenance, broke loose
the toothclench fence with one swift tarry boot,
then tore up wormwood shootlings, shivered kindling
on the greens and spleenish gripped the glass
(wherein a wakeful blinking eye consumes the seconds),
from the spark cajoled a glow, a lick—then snifting drams
he raptly hewed–the bleatings loose as moonblind
hedge-pigs—he chucklefanned the billowsflames
and pranced a cloven jig, heeling boots cut rings of
lights of blues in gravestone letters, hues of rue
and gelid tones across the floorboards.

From gallivant to stutter-step when wails
Trailed, dwindled, turned to chirpy cackles,
grackle titters–I smelled a hundred growling
cats and heard the wheels grinding dust,
leapt fast touched toes to rug as with a rush

Sweet Lord he yelled, not quick as I nor half
the luck. Admiringly, I wondered how she knew
the well—long dry, we thought, and covered up—
had recently begun to seep, to drip again and
chirrup in the orange dust where rusty toadish
slabs recline and chimney pots dissolve in brine.

Alight, alight, I hear the call—they step
and stamp in sprightly boots and Paw flings
widest doors, purloins the widow’s gauzetips,
passes round the candle cloaks while all unveil
dangle-lips, rub simple feet below the oaks.

The bloody reverend jowls into view, gives
mudthroat, cracking hands aclutch the goat-staff,
gripped in rigor—all in horror pause to
gape, the ragged nose, the eyeless face—then
palest fingers push through skin of parchment,
tips protrude as soft as worms then grips and
flings the cape—

without the carapace of flesh prims sweet delicious
Mirabella, she of face and lissome lace who dons
her horn-tipped diadem to stunned applause—
her womb of web spins silken threads
and from the glissand strands grow bulbs
that swell and bloom—each splits and peels,
reveals a twining frame therein of pale hands
and weeping head, the coiled spine and folded limbs—
she flits one to the next, combs liquid hair
and fits to barren orbit glim of eye,
and each goes creeping—

Lady H the first to shake throws back her
mouth to ululate and smacks with heels, her
quaking breast, the parquet slick and pooling
as the others prowl and lurch to motion,
snooling round with thumpthump tails to howl while
the hobnails strike a mournful harrow—
how they fling themselves about! The ringing
air and hollow men, the knives that flay, the
fragrances of words that leap to mind as
canticles to vagrants do, who blind but
ripe with song exhale and start to sway—they
grind the edge—the drama builds—she slices
biting skin and downs the shreds with draughts
of tightness, drams of brightness. Something fraught
now bursts to life, the orange eyes, the wailing
wings, and all the leaping crowd now sings—

Then from below come pealing bells, the
rolling knells from wells and henges gurgle
up—I pocket-tuck a half of goose and
sneak a loaf then kick the cherub squarely—
‘mid the gusty wails stick fast a fork in
Aunty’s screaming toe, ease out the window.