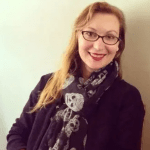 Ardi Alspach hails from the beautiful and sunny coast of South Carolina and is currently an associate publicist for Tor Books in New York City. Her opinions are her own.

Like almost everyone else who moves to New York City, I came here to live out a dream. I am a long-time fan of fantasy and science fiction, and it was my dream to work in genre publishing. When I moved here to attend the NYU Summer Publishing Institute, I didn’t know a soul. One of the first people I connected with at NYU was also a fan and shared this dream, and together we would venture out into the city in search of others like us, and we would find them at genre themed book events. It was this kind of networking that ultimately and indirectly led to my job in the publicity department at a major publisher of science fiction and fantasy.

Since then, nearly two years later, I’ve come to observe the power and importance of book events in helping to build and reinforce the essence of community not just among fans but also among published and unpublished writers. I speak from a strictly SFF background, but I am also a member of the New York chapter of Mystery Writers of America as a publishing professional and as an amateur writer, which has given me experience that leads me to believe that the same things can be true across fans of all genres. As a publicist, it’s my job to call attention to the authors and the books they are publishing through my house. I’ve observed a rich and vibrant community online that could be made even richer through simple face to face interaction.

I think one of the most outstanding examples of this is the monthly reading series called Fantastic Fiction held at the KGB Bar on West Fourth Street. It’s hosted by Matthew Kressel and award-winning anthologist Ellen Datlow. I have to admit that it was a bit intimidating at first. I was new to New York as well as to the community, and I only knew one person who would be there. The neon sign spelling KGB flickers on around 6:30pm on every fourth Wednesday of the month. The bar itself is up a flight of steep black stairs surrounded by red walls. Those red walls continue to a dimly lit space decorated in Soviet paraphernalia, hence the name of the bar.

Immediately, I was welcomed. I met many aspiring writers as well as published writers from both New York City and Philadelphia. I also met a few editors and art people who were soon to become my co-workers. Additionally, I became acquainted with a few people who were just ardent fans of the genre and have been coming to these readings for many years. The room was dim yet inviting. The space was packed, and people were spilling out down the stairs just to be a part of this experience. Each month there two readers at the event, and in the space between and after the readings there is time for the audience to mix and mingle, to buy books from Word bookstore, to talk to each other, and to talk to the readers. A lesser known author is always paired with a more well-known one. Everyone has a chance to learn about a new author, and everyone has a chance to meet an author they may have been a long-time fan of.

It was at this event that I felt for the first time that I truly belonged to a community, and I think this is a sentiment that might ring true for other fans of genre fiction when they go to events like these for the very first time. Often times, you meet some really fantastic people when you’re in line waiting to get a book signed by your literary idol, or when you’re early to a reading and your friend hasn’t arrived yet. You realize, suddenly, that you’re in a room full of like-minded souls. In the past, you may have felt like you had nothing in common with the stranger sitting next to you, but book store events by nature automatically give you something to talk about, and this opens the way for an the opportunity to make a new a connection—a friendship, a creative partnership, or a networking win.

The Mystery Writers of America, with its longstanding network of writers, editors, and other publishing professionals, has established a similar feeling of community. With organized chapter events, the community surrounding the organization is far more cohesive and supportive than I’ve witnessed within the SFF community in New York City (so far). It seems as though I’ve seen mostly the same people at every MWA sponsored event I’ve gone to (both members only and open to the public), and MWA shows that the support of a venerable organization can create a membership that is enthusiastic about bringing together the community and supporting emerging as well as established writers. As a new member who is not published, I was as welcome to their group as any published author, to the point where I’ve been recruited to join a sub-committee that assists with outreach to young writers and publishing pros, and I’ve been a member for less than a year.

With all of that in mind, I’d like to turn towards a few sources that indicate that independent bookstores are on the rise again (slate.com, buzzfeed.com, salon.com). I believe that these established communities of readers and writers, both professional and amateur, should be embracing this trend by supporting book store events as another way of creating and enhancing community. Without this community, many writers would remain unheard. The Huffington Post (huffingtonpost.com) attributes the reason for the reemergence of the independent bookstore to the vacuum left by the closing of big box stores as well as the rise of the “shop local” movement. May 2, 2015 saw the first national Independent Bookstore Day (washingtonpost.com) that encouraged people to visit their local indie bookstore to see what they are all about. Several stores in New York City hosted events to coincide with the day and attract even more customers to their stores.

Additionally, these articles speak about the resurgence of the independent bookstore as a part of a groundswell for community support and activism, and I believe that book events should and could become a vital part of that movement. Bookstores can continue to be hubs for fans of a particular genre or books in general—a place where people can come together over a common interest and share in that mutual appreciation. It’s an excellent way to build strength in fandom while also building strength in community by supporting local businesses. As a publicist working for one of the big five publishers, I clearly have a vested interest in seeing a rise in book events, but as a fan, I also have a need to connect with others who appreciate the same things I do. I believe this is why cons are so successful, but we don’t really need giant conventions to create a sense of community. All we need is each other and our favorite local book store.