What if the Earth was set to be utterly destroyed, all life everywhere wiped out by a monster of a meteor? And what if, ultimately, that apocalypse … just passed us by? That is the basis for Apocalypse Cancelled, a themed anthology put together by Luke Melia, who also contributed fiction to the book.

Within these pages are short stories, police reports, comics, newscasts, poems, and a multitude of flash, all depicting characters before, during, and after the dreaded apocalypse that-was-not-to-be. As a setup to document and explore human nature at our most dire, while concurrently pushing characters further and forcing them into a new normal after a failed apocalypse, the idea behind this anthology is both intriguing and exciting. In many ways, it delivers just what it promises: disturbing, humorous, and contemplative thoughts on how humanity would behave in such a drastic situation.

The flash pieces each tend to revolve around a particular character and their own, micro-oriented reaction to end times. For example, in these short, bite-sized fictions, there are sneak-peeks into people’s need for escapism, for their thankfulness that their suffering will be over, and a desperation to fill their lives with all they believe is missing before end-times is upon them. The interspersed police reports take place post-non-apocalypse and question crimes, punishments, and whether the police can morally stand in judgement over all that has happened. The short stories delve deeper, some via exaggeration, many documenting the emotional struggles characters are put through, whether before or after the meteor doesn’t hit. Of particular note is the detail given to the design and formatting of each short story, all of them stylized to represent the tone of the story being told.

Many of the stories deal with the complete disregard and degradation of humanity in their final days, with the presumption that degradation is the human baseline, as many apocalyptic storylines tends to lean. Yet, this is only a portion of what the book offers as characters engage in activities once thought to be out of reach. Some of the stories deal with that all-important question of what do we ache for that we could accomplish, or try to accomplish, if we knew there to be no repercussions? And in answer, we have tales of characters who finally grow the courage to truly be themselves, characters who find meaning in new directions, and even characters who don’t feel the need to change a single thing about their routines because they have already been content in the lives they’d been living pre-meteor announcement.

Some of the stories fall on the more humorous side of the spectrum, with dark comedy or ironic twists giving some relief from the bleaker stories. One specific comic is a standout with how it metaphorically compares behavior that is typically considered normal in many households against the actions of humans finally facing freedom in their end-of-days. Its depiction, and its ingenious and impious use of raccoons, makes a clear statement on the state of our unhealthy relationships with normalized addictions.

The anthology could have benefitted from a wider lens, one encompassing stories featuring more diverse characters and backgrounds; because of the focus on stories featuring characters primarily in the U.K. and U.S. there is a certain commonality between them all. One can’t help but wonder how the emotional, apocalyptic situation might have been handled in other parts of the world, by characters from different religious and cultural backgrounds, with a wider disparity of ages and personalities.

As a whole, the anthology is a darkly humorous jaunt through end-times and beyond, with more serious and disturbing stories in between and a few emotional gems hidden throughout. Recommended especially for those who have a love of humorous zombie flicks, a macabre sense of humor and/or would like to question how they, themselves, would act in the severe circumstances presented here.

Content Warnings, as printed on the anthology, include: “Extreme Violence, Graphic Sexual Content, Suicide, Strong Language, Drug Use, Spreadsheets, Raccoon Fornications, A Sh*t Ton Of Cats.” Also note that there is the inclusion of a single snuff short, as well as two flash stories involving cannibalism. 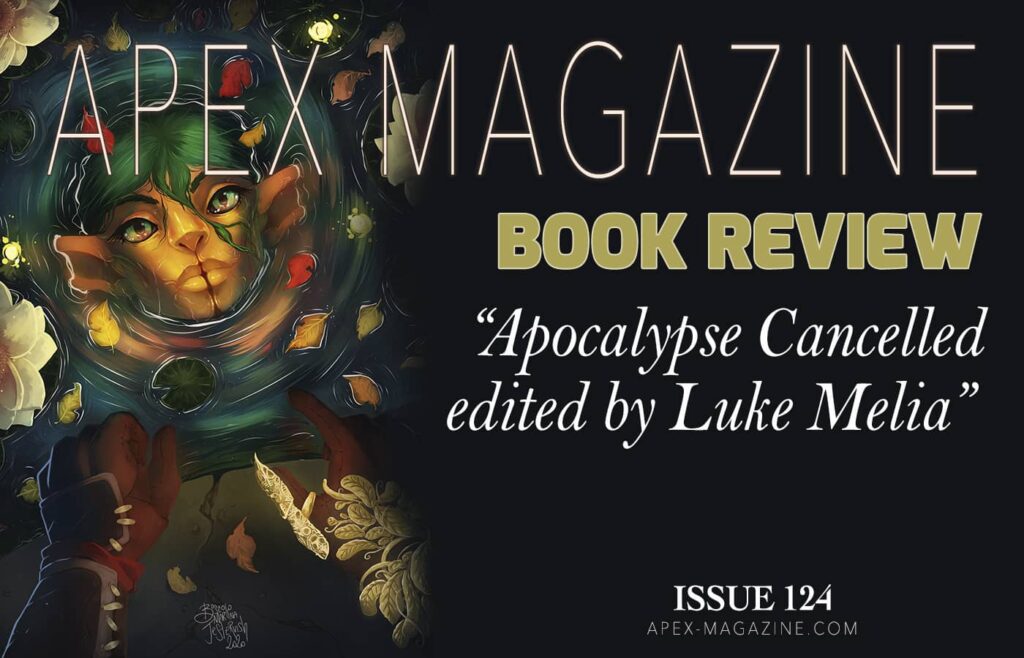