Whether your days ahead are long and bright or short and dark, we thank you for sharing them with Apex and hope this update finds you well. We have some exciting things happening in June!

Issue 131 will continue to be released over the coming weeks. So far, we’ve released “Hoodie” by Tonya Liburd, “A Monster in the Shape of a Boy” by Hannah Yang, “The Fruit of the Princess Tree” by Sage Tyrtle, and “Americana!” by Sam Asher. Upcoming are stories by Koji A. Dae, Tim Waggoner, Eugen Bacon, and Jayn Gates. We have also released our two nonfiction pieces from Errick Nunnally and Jeffrey Ford. Watch for our new releases at www.apex-magazine.com.

Our June Podcast will be “In the Monster’s Mouth” by Tim Waggoner.

New Release! CURSE OF THE BASTARDS

Sword and sorcery collide with horror once again! First came King of the Bastards, then came Throne of the Bastards. Coming this June, Curse of the Bastards from Brian Keene and Steve Shrewsbury on June 28th. Preorders available at apexbookcompany.com!

Steven L. Shrewsbury and Brian Keene’s award-winning Bastards trilogy comes to its exciting conclusion with CURSE OF THE BASTARDS!

Rogan—the aging, jaded barbarian who gave up his throne—painfully realizes that his most storied childhood heroes are fading into antiquity, becoming mere ballads in the eyes of the younger warriors.

The authors will be hosting a live-streamed conversation the day of release on Brian Keene’s YouTube channel. They’ll also be visiting /r/fantasy on Reddit May 26th for an AMA. Watch this space for details!

HOLE IN THE WORLD by Brian Keene will be our Patreon June Book of the Month.

We unfortunately had to cancel our May Snap Judgment. We are working hard to reschedule! Our particular apologies to those who had submitted their work for feedback. We hope you’ll resubmit when the time comes!

The microfiction theme for June is SAND AND SALT. Submissions are open until May 31, midnight central time.

Check out our April winner, “The Nightingale, the Lark, and the Spider Queen,” by Kai Delmas, here.

Also on our Patreon, we have an exciting lineup of exclusives for our Patrons from the Authors of Issue 131. We’ll have a critique workshop, interviews, photo tours, and story insights. Keep an eye on our Patreon!

Not a Patron? Join us for as little as $2/month to get access to these exclusives and the magazine in your inbox!

As always, we have fun and community on our Discord: our monthly game ‘night’, critique swaps, live co-writing sessions, and general community support for writers. (Rejectomancy, anyone?)

To add the Apex Events Calendar to your google calendar, follow this link: https://tinyurl.com/4c74rext 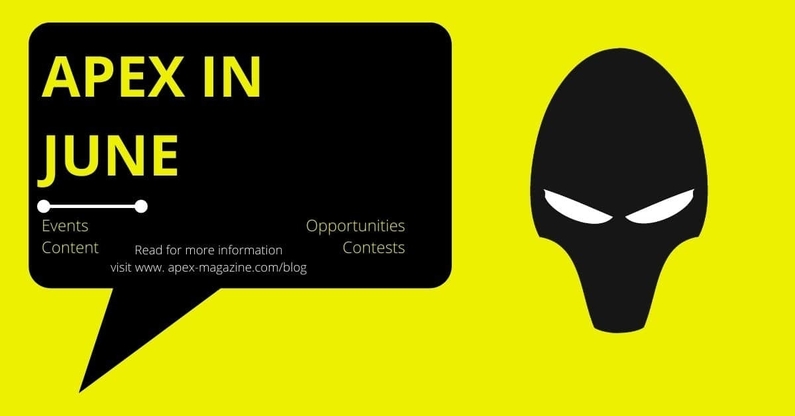