Usman T. Malik is a Pakistani-American writer and doctor. His fiction has been reprinted in several year’s best anthologies including the Best American Science Fiction & Fantasy series and has been nominated for the World Fantasy Award, the Million Writers Award, and twice for the Nebula. He has won the Bram Stoker and the British Fantasy awards. Usman’s debut collection Midnight Doorways: Fables from Pakistan has garnered praise from writers such as Joe Hill, Paul Tremblay, and Karen Joy Fowler and will be out in early 2021. You can find him on Twitter @usmantm. 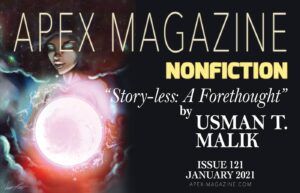 The text came in the evening: a colleague I’d met at a business meeting four days before my symptoms started had tested positive for COVID-19.