Steven Barnes is the author of over thirty novels, and has been nominated for Hugo, Nebula, and Cable Ace awards. The winner of the NAACP Image Award, he wrote the Emmy-winning “A Stitch In Time” episode of The Outer Limits and the New York Times bestseller The Cestus Deception. He lives in Southern California with his wife, British Fantasy Award-winning author Tananarive Due. Tananarive Due (tah-nah-nah-REEVE doo) is an award-winning author who teaches Black Horror and Afrofuturism at UCLA. She is an executive producer on Shudder’s groundbreaking documentary Horror Noire: A History of Black Horror. A leading voice in black speculative fiction for more than 20 years, Due has won an American Book Award, an NAACP Image Award, and a British Fantasy Award, and her writing has been included in numerous best-of-the-year anthologies. Her books include Ghost Summer: Stories, My Soul to Keep, and The Good House. 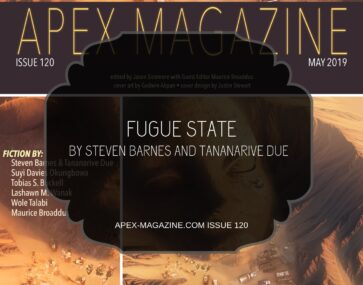 by Steven Barnes and Tananrive Due | Short Fiction

“Shit,” Charlotte Berry whispered as the fog of sleep began to clear. She heard Arthur fumbling in the bathroom cabinet and saw his reflection in the mirror, salt-and-pepper hair and a small bald spot as he hunched over, a medicine bottle close to his face. She wanted to pretend he only needed reading glasses. But it was far worse than that.