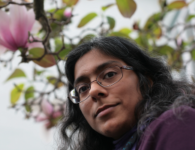 Shweta Narayan was smelted in India’s summer, quenched in the monsoon, wound up on words in Malaysia, and pointed westwards. She surfaced in Saudi Arabia, The Netherlands, and Scotland before settling in California, where she lives on language, veggie tacos, and the internet at shwetanarayan.org. Shweta’s poetry has recently appeared or is forthcoming in places like Stone Telling, Mythic Delirium, and Jabberwocky, and her stories in the anthologies The Beastly Bride, Clockwork Phoenix 3, and Steam Powered. She was the Octavia E. Butler Memorial Scholarship recipient at the 2007 Clarion workshop.

Oranges: you’ll have to grow your own, love, feed them
finger-cut, moon-flow, any blood will do