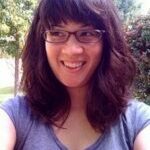 Let’s talk about Strong Female Characters. If you write or read (or watch or produce or edit or otherwise interface with) entertainment featuring lady protagonists, you have probably talked about those three little words quite a lot. Maybe you are talking about them right now, even.

When I was in high school, there was one other girl who loved Star Trek as much as I did. Deep Space Nine was our jam, so our bond was forged in the fire caves of Bajor, solidified by amazing-in-our-minds inside jokes revolving around oo-mox and various disgusting uses for Odo’s bucket.