Jeffrey Ford is the author of the novels The Physiognomy, Memoranda, The Beyond, The Portrait of Mrs. Charbuque, The Girl in the Glass, The Cosmology of the Wider World, and The Shadow Year. His story collections are The Fantasy Writer’s Assistant, The Empire of Ice Cream, The Drowned Life, and Crackpot Palace. His short fiction has appeared in numerous journals, magazines and anthologies from MAD Magazine to The Oxford Book of American Short Stories (2nd edition), edited by Joyce Carol Oates. His work has been translated into nearly 20 languages and is the recipient of the Edgar Allan Poe Award, the Shirley Jackson Award, the World Fantasy Award, the Nebula Award, and the Grand Prix de l’Imaginaire. 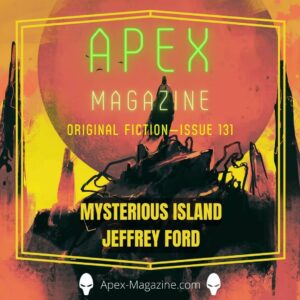 Out at the end of the world on a long spit of land like a finger poking into oblivion, nestled in a valley among the dunes, sat The Church of Saint Ifritia, constructed from twisted driftwood and the battered hulls of ships. There was one tall, arched window composed of the round bottoms of blue bottles.