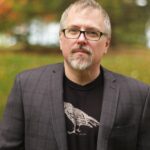 World Fantasy Award winner Jeff VanderMeer has had novels published in fifteen languages and made the best-of-year lists of Publishers Weekly, the San Francisco Chronicle, the LA Weekly, and many others. His short fiction has been featured on Wired.com’s GeekDad and Tor.com, as well as in many anthologies and magazines, including Conjunctions, Black Clock, and in American Fantastic Tales (Library of America). He writes for the New York Times Book Review, the Washington Post, the Los Angeles Times, and many others. His latest collection is The Third Bear. “Secret Life” was the title story of his previous collection, and is the (relatively) Happy version of events at a company he used to work for. “The Situation,” collected in The Third Bear, is the (incredibly) sad version of subsequent events at a company he used to work for.

A vision of the building from on high: five glittering floors surrounded by a dull concrete parking lot. To the west lay a forest. To the east, the glint of a shopping mall, substantial as a mirage. To the north, highways and fast-food restaurants. To the south, a perpetual gloom through which could be seen only more shadow.