James Beamon has an unbelievable past, mostly because he uses his spare time writing down fabrications to sell to others. That said, he’s been in the Air Force, to Iraq and Afghanistan, on the Nebula Recommended Reading List, and in trouble more times than he cares to honestly admit. But he doesn’t even try to sell honesty, claiming it doesn’t have a believable character arc. Currently he lives with his wife, son, and attack cat in Virginia and invites you all to check out what he’s up to on Twitter (@WriterBeamon) or on his blog fictigristle.wordpress.com. 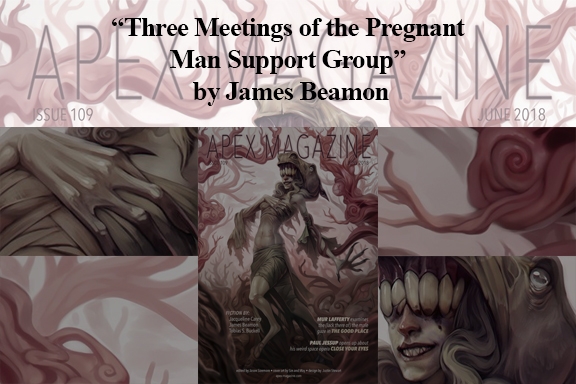 I meet with the other pregnant men on Thursdays. Our room at the civic center is between the recovering alcoholics and cancer survivors. We’re currently at eleven, now that Wallace shot himself.

Soliloquy in a Cheap Diner Off Route 66

He presses pause and life stops. The trucker in the red and black flannel shirt at the counter is stuck in mid chew of a meatloaf that was never meant to linger. The young woman in the blue jeans and white blouse holds an angry fist over a jukebox infamous for taking payment while withholding songs.