Carrie Laben grew up in western New York and earned her MFA at the University of Montana. She now lives in Queens. She blogs at 10,000 Birds, and her work has appeared or is forthcoming in such venues as Birding, The Dark, Indiana Review, Okey-Panky, and the anthology Mixed Up! In 2017, she won the Shirley Jackson Award in Short Fiction for her story “Postcards from Natalie.” 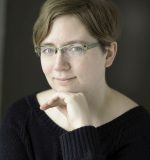 But really, the whole damn country is haunted. Every community theatre has an old actor who won’t leave the lights behind; every college and university has a pretty co-ed who hanged herself or jumped out a window; every bed and breakfast has a little child in white. Every Lover’s Lane has a Hook Man, a Goat Man, a Skunk Ape.