Welcome to April’s “Words for Thought.” I have mixed emotions writing this month’s column, and fittingly enough, this month’s stories all explore the mixed emotions of hope and despair. As most folks know by now, Apex Magazine is going on indefinite hiatus. While I completely understand the reasoning behind taking a break, and look forward to reading the anthologies, collections, and novels coming out of the book-publishing side of Apex, Apex Magazine will definitely be missed. Thank you to Jason, Lesley, and the entire Apex team for giving “Words for Thought” such a fantastic home for nearly three years! It’s been an honor being part of the Apex family.

Before the World Crumbles Away by A.T. Greenblatt, in the March/April issue of Uncanny, falls into a subgenre I really enjoy—the quiet apocalypse story. There are no zombies, or massive, world-shattering events, just the inevitable erosion of the world as we know it through a series of climate change-induced earthquakes. Against this rather bleak backdrop, Elodie and Marina meet and tentatively begin a relationship. Marina is a painter, Elodie an inventor, and each has differing views on what the end of the world means.

The painter has left the lovers’ faces blank. She’s glossed over the tension in their shoulders. She’s included the families in the distance, trying to have a carefree night by the lake, but she didn’t include the long cracks in the ground.

Is there any hope left? Can anything they do have meaning? Is there any point in seeking joy when everything is going to crumble? As the two try to find their way toward each other and a common ground on which to build a relationship, both characters also face their own individual struggles. Marina is trying to make enough money to get her brother out of the massive debt he owes to some very unsavory people—money he only borrowed to help her get optical implants to assist with her impaired vision. Meanwhile, Elodie is working on creating an AI to act as a caregiver in emergency situations, taking care of children in an increasingly dangerous world. Elodie and Marina’s relationship feels real and grounded. Both the places where their stories intersect, and where they take their own journeys, have distinct and satisfying arcs. The story is beautifully-written, too. Mirroring the characters’ internal struggles, Greenblatt’s striking imagery creates moments of wonder and hope amidst the despair.

Treading Water by Tapanga Koe, from Capricious Issue Eleven, offers up a lovely metaphor for its main character’s experience of queerness. Peter hides tentacles inside his skin, writhing and desperate to get out. He’s terrified they’ll emerge at work, or in some other public location, and more specifically, he’s terrified of how people will react once they see the “monster” inside him.

So far, blessedly, the charade has held. Despite his secret tentacles – ever-churning just beneath the surface of his skin – he manages to soothe and quiet his thoughts, dampening them to whispers; keeping up his pleasant, ordinary appearance, maintaining his careful, deliberate words. Though it is exhausting, he has managed to remain anonymous – forgettable – to slip through life with a calculated mediocrity.

He’s afraid of being ostracized or facing violence. His best-case scenario is simple disgust. Yet despite his anxiety and fear, in private, when he’s able to let his tentacles emerge, he experiences a kind of euphoria. One fateful day, Peter enters cafe and finds he can no longer keep his tentacles inside. He collapses and begins to transform, certain the handsome barista and other cafe patrons will be horrified. Instead, they immediately rush to take care of him, tenderly lifting him and carrying him to the nearby ocean. The barista jumps into the water with him, and Peter is stunned to find the barista transforming into a creature much like himself. When it becomes clear Peter doesn’t know how to swim yet, the barista calls to Tim, another patron of the café, to help. They guide Peter back to shore where he resumes his human form and looks up to see the barista and Tim holding hands, looking down kindly at him. It’s a powerful and uplifting image, ending the story on a note of hope. It doesn’t just paint a picture of two men in a loving relationship; it paints a picture of solidarity. Johnathan and Tim are a united front; they are part of a community, and they want Peter to know he not alone. From despair, Peter learns there is a safe space where he can be himself, and that his true nature is beautiful—not just in the privacy of his dreams, but in the eyes of others as well. The story does a lot in just a few pages, giving readers a lovely moment of transformation both literal and metaphorical, and allowing Peter to experience real growth and change.

The Archronology of Love by Caroline M. Yoachim, in April’s Lightspeed Magazine, looks at memory, grief, and how the dead and the past are honored. Saki is part of a group of scientists on New Mars, trying to determine what happened to the first colonists who landed on the planet, a group which included her lifelove, M.J. A mysterious plague wiped them out, along with their crops and animals. In fact, all organic matter vanished, including the bodies of the colonists, leaving only synthetic materials behind.

There is no objective record of the moments in your past—you filter reality through your thoughts and perceptions. Over time, you create a memory of the memory, compounding bias upon bias, layers of self-serving rationalizations, or denial, or nostalgia. Everything becomes a story. You visit the Chronicle to study us, but what you see isn’t absolute truth. The record of our past is filtered through your minds.

The scientists have access to the Chronicle, an alien record that allows them to study the past and partially immerse themselves in it. However, in entering the Chronicle, they inevitably alter it, leaving traces of themselves behind. Much like the act of observing certain particles changes the way they behave, observing the past through the Chronicle alters it. The scientists literally cannot remove themselves from the process, and there is no such thing as an impartial view of history. The story explores the way memory and emotion work together, how mood and context impact the way we perceive and recall events. Yoachim does an excellent job of presenting the story’s mystery, and both the hope and despair of the scientists pursuing the past. They know their actions will change the Chronicle, but they cannot let go of the human need to understand. The story is broken up with a narrative frame, the voice of the lost aliens as they observe the humans from outside of time. Ultimately, as the title suggests, this is a love story, but on more levels than one. The hunger for understanding goes both ways, as does the desire to honor the dead and keep the past alive. It’s a melancholy story, but not without joy. Hope is embodied in Saki’s son, Kenzou, and his boyfriend, Hyun-sik. While Kenzou mourns his father, he is quicker to find a way to move on. Reliving memories is essential to Saki’s process of grieving, while Kenzou looks ahead to the future, informed by the lessons of the past.

In That Place She Grows a Garden by Del Sandeen, from Fiyah Issue Ten: Hair is a story with events that ring all too painfully true. Rayven is one of only two black girls in her private, Catholic high school class. When a new principal comes on-board, she decides the prior administration’s enforcement of the dress code was too lax and tells Rayven she needs to cut her locs or face expulsion. Rayven is understandably heartbroken. She’s spent four years growing her hair, and no one should be able to tell her what to do with it. Her mother offers to help her fight, but Rayven doesn’t want to risk losing her place at the school. She cuts her locs, makes a bouquet of them, and places them on her windowsill. Within a few days, she finds a yellow flower seemingly caught in her hair. When she tries to remove it, she discovers it’s growing from her scalp, and that’s only the beginning.

Each morning, more flowers bloomed in random places. Once, three small morning glories curled behind Rayven’s ear, but otherwise, they showed up in singles: a red snapdragon at the crown, an orange poppy at the nape. Within a few weeks, only half of her hair was visible. The rest of it was a garden of colors.

Of course, the principle is incensed, even though Rayven protests she can’t control it. When the principal tries to take matters into her own hands and cut the flowers, a swarm of insects and birds rise to defend Rayven, but the respite is only temporary. It’s impossible not to feel rage on Rayven’s behalf, to want real comeuppance for her principal, and to hope that the next principal will be better. But it isn’t that kind of story. It mirrors all-too-real situations of black hair being policed, and in some cases, forcibly cut. However, even with the injustice of Rayven’s situation, this is a story of hope. Beauty grows in place of Rayven’s cut hair, and she herself never gives in to despair. Even though she shouldn’t have to, she handles the situation with grace, getting justifiably sad and angry, but proving herself far more mature than most of the adults around her. The imagery is striking, even when the story’s subject matter is painful, and I can’t help loving the picture it paints of Rayven striding unapologetically through the hallways of her school with a glorious afro made of flowers, birds and bees following her, daring anyone to touch her or tell her what to do. 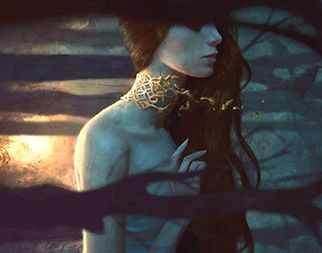